Combined action by the UK Border Agency, the police and Brent Council on migrant workers has created controversy in Cricklewood which has spilled over intolively debate on the Streetlife forum of the Kilburn Times LINK

The local streets have long been a traditional picking up point for casual building labour in the early morning. It used to be mainly Irish workers but is now generally more recent migrants.

Mapesbury Safer Neighbourhood Team have cuiculated this notice via email, letters and the NW2 Residents' Association: 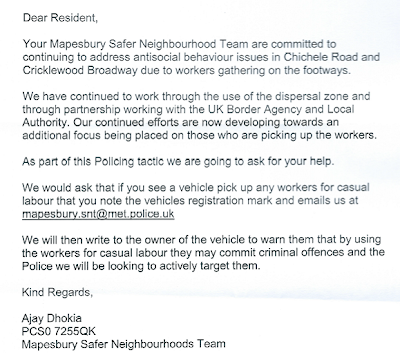 Some see this crackdown as partly a result of media hostility towards Eastern Europeans and point out that it was not raised as an issue in the past. It appears to reinforce prejudice and increase division when Brent Council was critical of the way UKBA raids on stations and the 'racist van campaign did just that. Nevertheless the Council are cooperating with UKBA in this case seeing it merely in terms of 'anti-social behaviour'.

A further point made is that while migrants are being attacked for living off  benefits they are also attacked when trying to get work.

Asking the public to note down vehicle registration numbers and pass them on to the police is likely to cause considerable controversy.
Posted by Martin Francis at 16:35:00