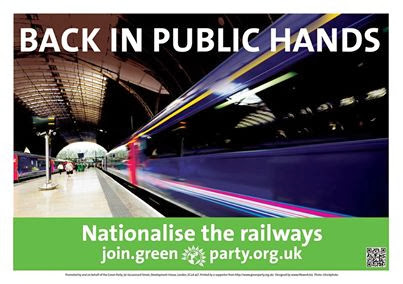 Among the fares announced were annual seasons for travel between Reading in Berkshire and London, which is up 3.23% to  £4,088. and travellers from Dover Priory and Deal to London see annual fares rising 3.04% to £5,012.


This latest price hike is going to put a dampener on many commuters' Christmas, and be a boost to support for Green MP Caroline Lucas's private members' bill calling for the railways to be brought back into public hands.

Travellers face overcrowded journeys as standard on too many routes, on the most crowded trains in Europe.

They face immensely costly journeys, and they know that more than £1bn of their cash is going into the 'black hole' of privatisation inefficiencies, plus billions more in declared and undeclared
government subsidies.

Casual users face a confusing fare structure that often leaves them paying more than they need or trapped with penalty fares due to confusion.

It's time to say enough is enough: privatisation has failed, we need to bring the railways back into public hands.