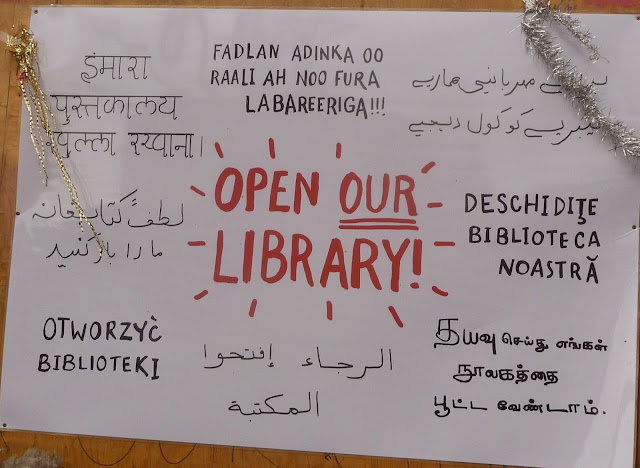 
Many people are asking when the police investigation in to the fake email support for Andrew Gillck’s change-of-use planning application for Kensal Rise Library be completed. It is, after all, three months since the council was first handed evidence of online fraud - an attempt to inflate local backing for Mr Gillick’s proposals. Brent later claimed that it had passed this material to the police.

Not exactly, alas. The council had simply forwarded its findings to the civilian-run national fraud and internet-crime reporting centre, Action Fraud. True, this is the first step in reporting electronic fraud and one which Brent was obliged to follow. Why the council didn’t tell residents that Action Fraud is a holding-centre only, not itself an investigatory body, and that it would take time before the actual police inquiry got underway is another matter.

So it transpires that it’s only in the last couple of weeks that Brent’s findings have actually reached the City of London Police’s National Fraud and Intelligence Bureau (NFIB), where they will be reviewed. How long it’ll take the NFIB to decide if there’s a criminal case to answer is unknown, likewise whether Brent is proactively monitoring developments or simply waiting on events.

A report last month by Mark Smulian in the Local Government Chronicle quotes a Brent Council spokesman: ‘It is clear that a number of the emails came from bogus email addresses but, unfortunately, it is not so clear that this necessarily constitutes a criminal offence’ LINK
As an astute observer has commented, however: ‘It should be remembered that in addition to the fake email debacle, real fraud did occur - someone generated letters & emails of support using real addresses without their owners’ permission. It is these cases that I would imagine are the most criminally damaging’. The case of Kensal Rise businesswoman Kirsty Slattery is but one example reported in the Brent and Kilburn Times  LINK
What is clear is that Mr Gillick is currently revising his plans for the historic Mark Twain/Andrew Carnegie library - his original planning application was unanimously rejected by Brent’s planning committee in September. Sensitive to accusations of previously having failed to consult them and so hoping to win over local residents to his latest scheme, the developer recently held a public ‘exhibition’ of his new proposals in a Kensal Rise pub.

To date, though, it seems he hasn’t yet submitted a new planning application to the council, nor should any be considered by the planning department until the outcome of the NFIB’s investigation is known. Unfortunately, the council’s line is to repeat, mantra-like, that it ‘has a responsibility and obligation to consider any valid planning application that is put forward from any individual(s). It must consider each on its merits in accordance with its statutory obligations’ (Christine Gilbert, acting chief executive).

Against the ongoing police inquiry and the possibility of prosecution for planning fraud, it would be absurd for Brent to pursue business as usual with respect to any further application from Mr Gillick for any Brent development - an apparent fake email in support of the Barham Library Complex appears directly linked to the Platinum Revolver/Kensal Properties Ltd developer - or anyone else for Kensal Rise Library. Meantime, it’s good to hear that the council has strengthened its ‘procedures...to require those who wish to make comments on–line to register and provide us with their contact details’, particularly as, according to a computer expert, ‘It’s [wan’t] very clever of Brent to collect comments via a system that [was] this easy to spoof’.

In fairness to Andrew Gillick, and as the person who identified him as the sole on-line supporter of the Barham Park Library planning application, I feel bound to say that it is wrong to accuse him of submitting 'an apparent fake email in support of the Barham Park Complex'.
The online comment made in his name would only be "fake" if it was submitted by someone else pretending to be him, for whatever reason.
If he did make the comment in his own name, using his own address, he was doing no more than I did myself on the same application, and my objection was a genuine one, on grounds which were eventually upheld by Planning Committee.
I drew attention to the apparent support for the application by Mr Gillick because the Council's Planning Code of Practice states, quite rightly, that members of the Planning Committee must apply Brent's planning policies consistently. I pointed out that Planning Officers had recommended that the applications for the former Kensal Rise and Cricklewood library buildings be rejected, in line with Brent's core policy CP23, but in the case of Barham Park they were recommending that CP23 should not be applied. I pointed out that, if the committee accepted the Officer's advice, on the application by Brent itself, over Barham Park Library, then a developer who had been refused permission on similar grounds for another former library building could use this inconsistency as one of the grounds for an appeal. It is my guess that Mr Gillick was supporting the Barham Park application in the hope that its acceptance would further his own ends over Kensal Rise and Cricklewood, but (if it was him who made the online comment, and not an imposter) he may just have been making a ironic point about Brent's inconsistency in its recommendations.
Philip Grant.

The blog's angle/framing is unfair. It seems to suggest Brent Council was dishonest with the public regarding passing the fraudulent email info to the police. It wasn't. The Council followed the procedure it was supposed to. From what I understand, Brent is as pissed off as us residents about the matter. As for considering any new planning application, the Council is obliged to until the applicant is charged with an offence . This anonymous blogger's time may be better spent chasing the police over the matter, rather than slagging off the Council which finally, has done something right.

Philip Grant makes a fair point about Platinum Revolver/Kensal Properties owner/developer Andrew Gillick supporting the Barham Library planning application - ironic or not - he's too dogmatic about the term 'fake' email. What if Mr Gillick's St Mary Mansions' home was sub-let at the time the supporting email was posted - indeed, what if it were sub-let at the time of the emails supporting his own application for change-of-use of the historic Kensal Rise Library? Why would a tenant of Mr Gillick's living in W2 have an interest in both Barham and Kensal Rise library applications? If Andrew Gillick posted the comments himself - as he's entitled to do - but wasn't living at the address at the time, then that is surely fraud?