How much has Brent House lost council taxpayers? 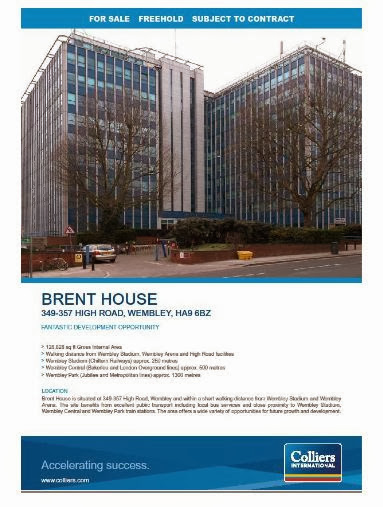 Brent Council purchased the leasehold of Brent House in Wembley in 2008 for £17.1m. Shortly after due to the financial collapse and the resulting property crash it was revalued in 2010 on an 'owner occupier use value' at £8.375m. The current depreciated  Net Book Value on the Council's Asset Register is £4.519m.

Brent House is now surplus to requirements following the move of council staff to the Civic Centre but Air France still occupies part of the building and it has Vodafone and Airwaves masts on the roof. The combined income stream for the council ois£363k. This is likely to be lost on sale of the leasehold as Air France will have to vacate the building.

Brent Council borrowed £17.695m for the leasehold purchase with an annual debt charge of £1.031m. This combines principal and interest and was forecast for repayment over 40 years. (I'll leave you to work out the total cost!) The outstanding principal of the original borrowing  is £16.886m - more than 3 times the Net Book Value.

The council now proposes to dispose of the leasehold but has not released the purchase figure. They do state however that the capital receipt offer is in excess of the 'property's Net Book Value on the Council's Asset Register but lower that the outstanding principal on the unsupported borrowing'.

We are left to work out that the bidder's unrevealed purchase  figure is between £4.519m and £16.886m. A wide range by any stretch of the imagination and surely residents ought to be told the extent of any loss on the sale? Details are restricted and the relevant Appendix to the report no published.

The Brent Executive will decide on Monday their preferred bidder  for the leasehold sale. Officers are recommending one from Stoford Ltd.

Stoford intend to convert and extend the premises to provide a 158 bed hotel, (Premier Inn) 66 homes of which 'around 22' would be affordable and 465m2 of retail with 165 parking spaces.

If that does not progress the reserve bidder recommended is Henley Homes which officers, whilst impressed by Henley's track record,  questioned deliverability'.

This is a new build bid with 269 homes of which 80 would be affordable and with a bigger retail space of 1,580m2 but no hotel.

Anong the rejected bids were:
Although the Council claim that a hotel meets with the Wembley Plan I would question whether the borough needs yet another hotel and most of the new Wembley hotels are closer to the Stadium, Arena and Wembley Park station.

It does seem to me that the Council has missed yet another opportunity to build affordable homes. A hotel is also planned at Bridge Park on the other side of the North Circular with a minimum affordable home quota of only 5%.

The retail fits in with the Council's plan to have a retail corridor all the way from Wembley Central station down to the Stadium, incorporatng the London Designer Outlet.  The redeveloped Elizabeth House, next to Brent House, already includes retail space which as far as I know has not yet been let. The jury is still out on the viability of the LDO.

Thank you for bringing these horrifying facts to our attention, Martin. It's not the sort of thing that Brent Council issues self-congratulatory press releases about, so Council Taxpayers would probably not have heard about it otherwise. It would be interesting to know which highly paid Council Officer(s) is/are responsible for recommending the action which results in this massive debt.
This situation reminds me of a point I raised with several Councillors, and with the Project Manager, over the redevelopment of Willesden Green Library Centre, and on which I never received a straight answer. Brent borrowed around £5million in the 1980's to build the Library Centre, repayable over 60 years. They have let Galliford Try demolish the building less than 24 years after it opened. How much each year will Brent be paying on the loan for a non-existent building up until the 2040's, and how will this be shown in Brent's "accounts"?
Philip.