Reflecting on the life of Mandela at Preston Community Library 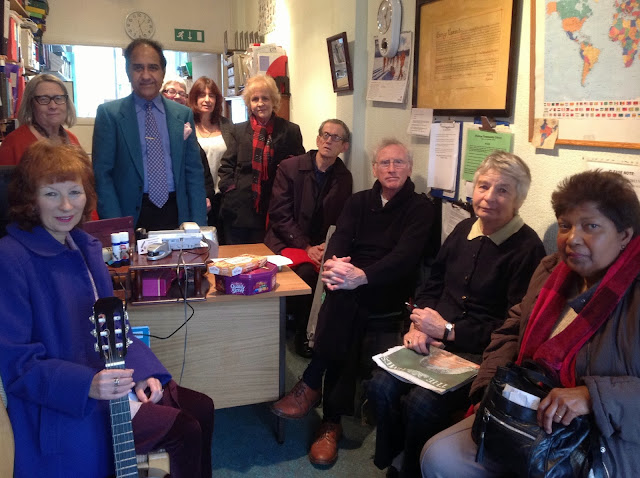 
We opened by singing the South African National anthem made famous by the ANC Choir - Nkosi Sikelele Iafrika -God Bless Africa- in Xhosa, Africaans and English.

We listened to Mr Mandela’s own words from his autobiography’ Long Walk to Freedom’ read stunningly as BBC Radio 4 Book of the Week by the great South African actor John Kani.

Local singer, songwriter Jill Goldman sang and accompanied herself on the guitar to a ‘Freedom’ a  song she composed for the occasion.  (You will see her in the front of the photographs with her guitar.  Geraldine Cooke, a local  literary agent,  of Barn Hill is standing next to her in one photograph and is at the back in the other photograph.)

Geraldine Cooke,  during many Apartheid years,  was the South African editor at Penguin Books.

She gave a fascinating  talk, on her part in working towards the release of Mr Mandela, which led to the rush publication of the book ‘Mission to South Africa’ the Report of the   so-called Eminent Persons, several of them former heads of state from seven Commonwealth countries, including Lord Barber who had been Margaret Thatcher’s Chancellor of the Exchequer.     This Group visited Mr Mandela three times in jail and travelled widely in the country ignoring ‘Whites Only’ signs on beaches and lavatories sending shock waves through the country.   Their Report ended with the words:’ if Nelson Mandela is not released there will be the biggest bloodbath the world has ever known’.

The  publication of this book proved the final push which persuaded Mrs Thatcher,  who alone in the Commonwealth had held  out against sanctions, to lean on President Botha to begin negotiations with the man in Pollsmoor Prison.

Geraldine Cooke  explained how she had steered the printing and publication of the Penguin Special, as it was called, in just two days around the world where it was a best-seller running to 100,000 copies including South Africa which of course banned anything critical, the fastest mass-market book ever published, worthy of inclusion in the Guinness Book of Records.

To achieve this in such a brief time would be impressive today with virtually instant printing-in 1986 when publishing schedules were counted in months, and more often years, it was a miracle.

This talk was something of a coup for PrCL as this was the first time Ms Cooke has revealed her part in this process, in public or private.

Sir Shridath Ramphal, Secretary-General of the Commonwealth at the time speaking in London this July said that ‘Mission to South Africa’ “Changed History”.

As a result, Ms Cooke was one of the first people to meet Mr Mandela and Winnie Mandela privately when they came to London following the release.

Sir Shridath gave permission for his statement from Barbados on the eve of Nelson Mandela’s death to be read out at 235 Preston Road.

Two poems were sent to PCL: one, composed on the eve of the first free and democratic elections in 1994 by Mick Delap,then Deputy Head of the BBC World African  Service,  and one in which the poet Delap breaking stones on his own land on Valentia island off the South West  coast of Ireland in 2010 imagines the imprisoned Nelson Mandela breaking rocks on Robben Island- a truly great poem and the listeners were deeply moved.

To honour the Methodist tradition in which Nelson Mandela, Walter Sisulu and other of the ANC leaders were brought up, as his funeral did two days later last Sunday, there was a  reading of  the 100th Psalm which urges the People to sing Praises as indeed millions have been doing in South Africa for the last 10 days.

There was a specially composed Eulogy for the event in praise of Mr Mandela and his life which was read to us by the South African, Kevin Johnstone, from Pinner: written by his wife Jan in English and translated by her into Africaans. Kevin read the tribute in both languages.

The event closed with a reprise of the Freedom song and Nkosi Sikekilele Iafrica.

Preston Community Library was honoured to host this event given added significance in this community  by Nelson Mandela’s visit to Wembley.

It was surely the equal to any held in any library or council chamber in the country.

It is hard to imagine Mr Mandela being anything other than dismayed at the difficulties people of the borough now have in access to books. Books were the one thing which were not subject to sanctions.

Students in South Africa rioted and were killed in their demonstrations for access to education: sixty-nine in Soweto alone in one day.

This Thursday PrCL will be holding its annual marathon reading of Charles Dickens’ novel ‘ A Christmas Carol’ in the original edition for adults and in the children’s edition to be followed by its traditional carol singing.

Anybody who would like to attend is more than welcome.  The event will commence at 2pm on Friday 20th December at PrCL’s temporary base at 235 Preston Road, Wembley, HA9 8PE
Posted by Martin Francis at 15:16:00