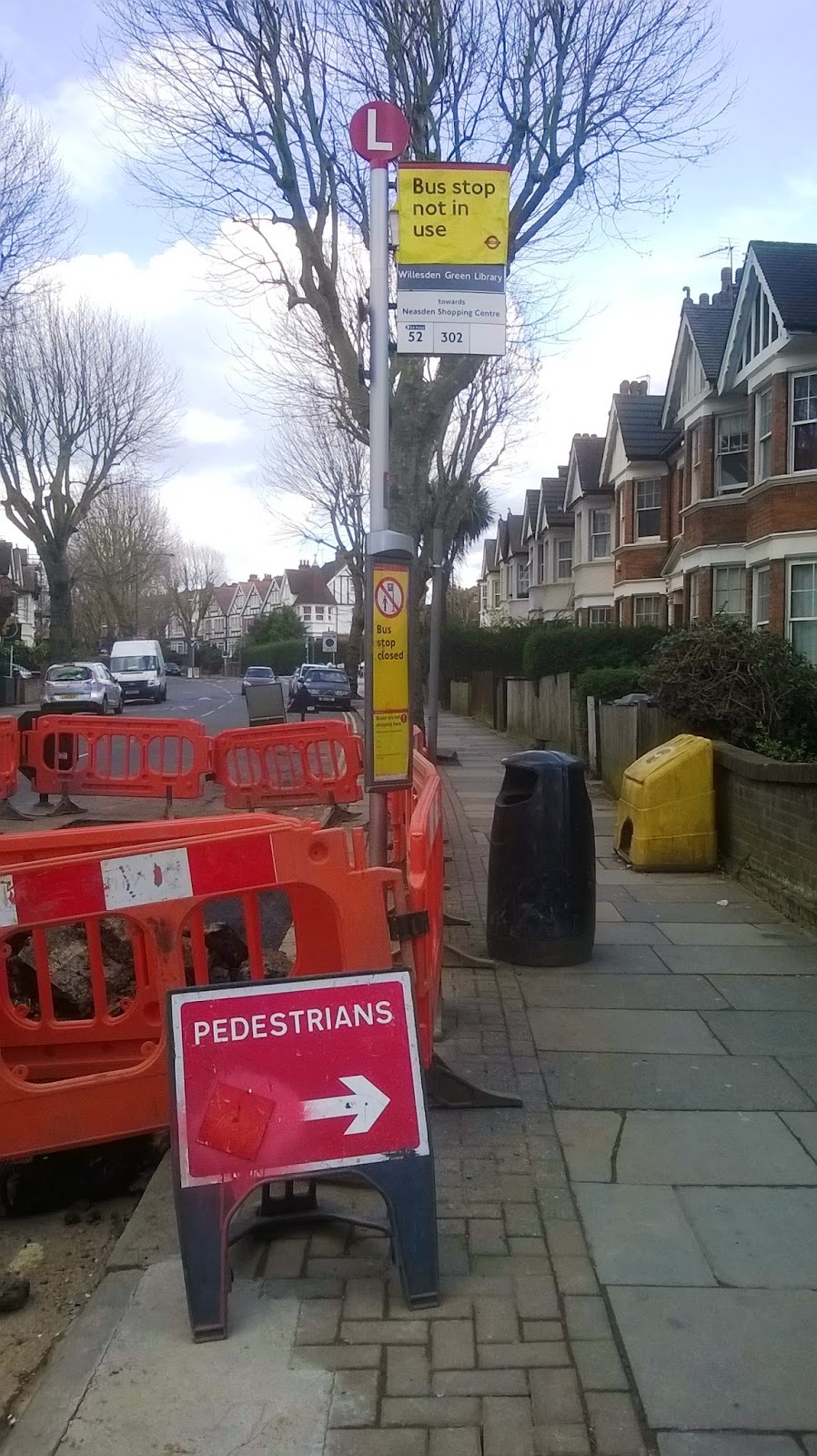 
I am writing to express my concern about the disppearance of the 52 bus stop outside the (Willesden Green Library) building site. The first I heard of it was when the bus intoned 'the next bus stop is closed' leading to the realisation that there is no bus stop between Sidmouth Parade and Hawthorn Road.


This is a distance of more than one kilometre.
Of course when we were debating the scheme to build 93 luxury flats on the  library, many people stated that they were concerned about disruption during the building works, these concerns were swept aside as were the concerns of local shoppers about the loss of their municipal car park.
Once again the needs of the local community (who actually live and work here) have been swept aside for the convenience of the developers constructing flats to be sold to foreign investors who are not concerned about the needs of local key workers and other nearby community members who rely on a a convenient public transport system.

The office replied that the complaint would be forwarded to the council's highways department but ultimately it was the responsibility of Transport for London. The officer was no longer working on the project.

Redston responded that the council did not care once the project had been steamrollered through and that residents had been treated with nothing but contempt throughout. He concluded, 'You don't have to live with the mess. We do.'

It is totally crazy.  Some buses do stop just before they turn up Staverton Road but others just drive past people trying to stop them.  It is a long walk up to the stop at Sidmouth parade if you are with children, shopping, elderly etc.  Why can't they just put a temporary one a few metres along Brondesbury Road avoiding the roadworks outside the site entrance.  There is no logical reason why they couldn't. 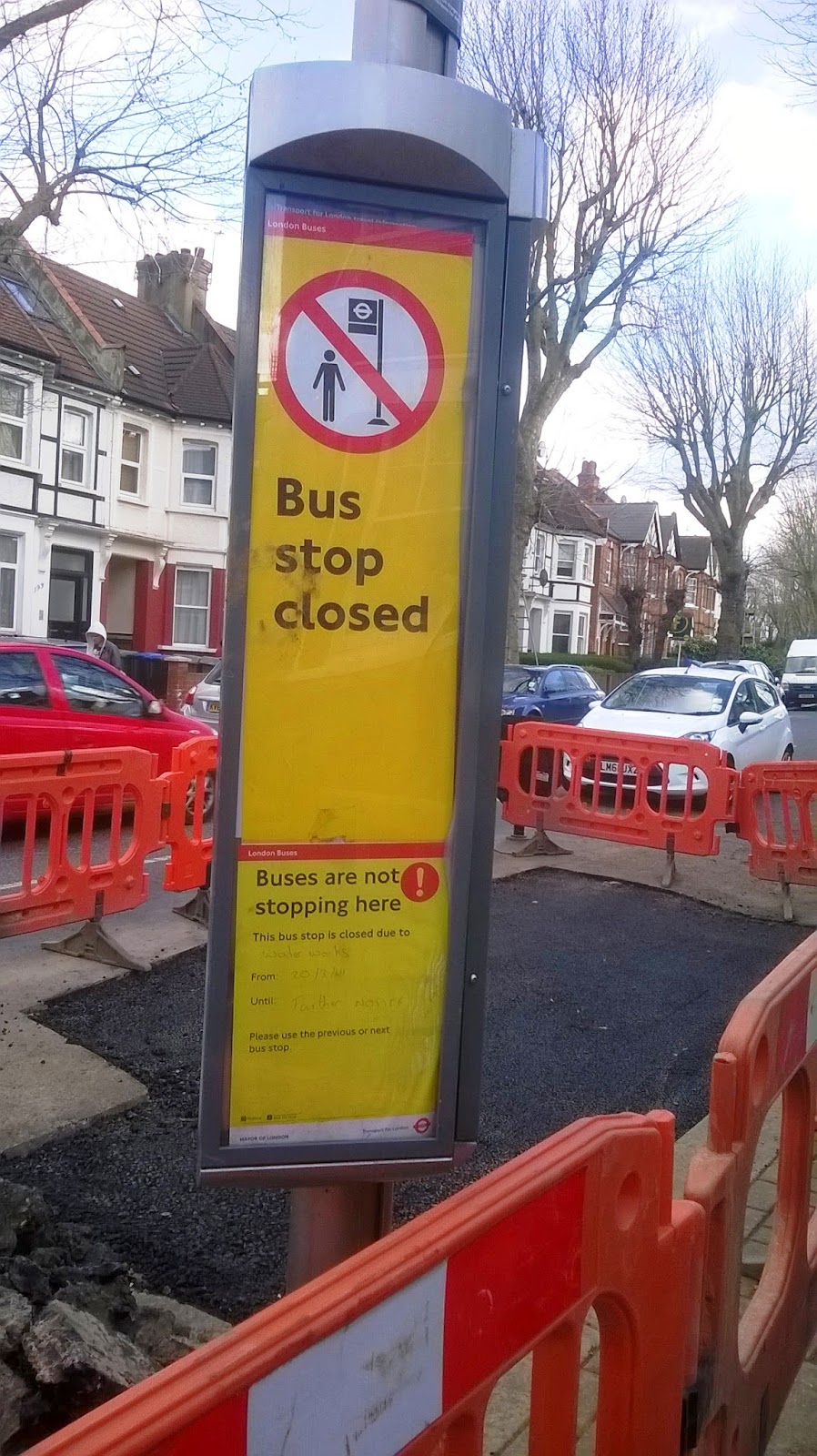 I went along to have a look for myself this afternoon. The bus stop that was resited for the building works was closed with instructions to passengers to walk to the next stop.  A few yards down the road a woman was waiting at the original bus shelter which now has no bus stop attached. The live destination boards were working and a 302 bus was indicated in one minute. I put my hand out to stop the bus but the driver ignored me. The bus sailed past only, infuriatingly, to stop at the red traffic light and disgorge passengers from the back door. The driver did not open the front doors for passsengers to board the bus.

This may seem trivial but for the elderly, infirm, pregnant and those with small children it is a major inconvenience and Brent Council and Transport for London need to sort it out quickly.

Throw them all out at the coming election

The current bunch of good for nothing Councillors do not deserve being representatives of the people when they never listen to community concerns.

I'd dearly love to throw the lot of them out but the problem is who do we replace them with? In Willesden Green thank goodness we have the choice to vote for Alex Colas who is standing as an independent from the Make Willesden Green campaign, but where are the other challengers? Why don't you stand? There's still plenty of time to get a nomination in and start knocking on doors. Alex's campaign seems to be having an effect and it would be great if there were more like him.

I'm pretty sure that the roadworks happening at the site, which means the bus stop is temporarily unavailable is due to standard utilities works - please let me know if you know otherwise, but from what i could see it doesn't have anything to do with the new cultural centre! Plus it has nothing to do with Councillors - it is not their responsibility - it is up to TfL and Brent's highways officers to ensure an alternative stop nearby is in place. Perhaps worth nothing too that S106 money from the new cultural centre is going towards upgrading existing bus stop facilities in Willesden Green, but of course there's no mention of this....

"It has nothing to do with the Councillors... its upto Brent's highways officers". Eh? Aren't the Councillors supposed to be in charge of the officers, in name at least!

Alas Councillors not up to me.

Why bother having elected representatives if they all hold up their hand and say. Not me another department is responsible.

Is it any wonder people do not even voting these days when a vote does not result in change for the better.

How many times have we heard songs such as "things can only get better" during and soon after elections but the sound quickly gets forgotten until next election.

We will be likely be gone before things get any better

It was standard utilities servicing and is TfL's responsibility. This whole article is incorrect and a load of rubbish as it has nothing to do with the redevelopment! One would have thought that Mr Redstone would have established the cause of the roadworks, but alas no.

How about Utilities starting pay people for inconvenience rather than profittering as usual.

Perhaps Councillors could do something and start charging these Utilities on behalf of local residents.

As i understand London Boroughs are already able to issue utility companies whose works overrun with an overrun charge, so this is already happening