Crowds turn out to save the Queensbury Pub

Members of the Brent Planning Committee were left in no doubt how much local people value the Queensbury Pub whene they were greeted be a great crowd on their site visit this morning.

Local people expressed concerns at losing a pub which provides a social hub for the area which is safe for women to visit on their own and a base for the Busy Rascals pre-school group and the National Childbirth Trust. Tom Miller, a prospective Labour candidate in the local elections, said it was a valued meeting place for young professionals like himself to meet.

Alex Colas, the independent Make Willesden Green candidate, asked searching questions about the lack of affordable housing in the developer's plans. Only 18% of the proposed housing would be affordable against the recommended 50% and he demanded to know why the Council had not insisted on more. He was told that it was a matter of financial viability.  Around the corner Brent Labour were campaigning outside Sainsbury's on the housing crisis. Other residents focused on the proposed 10 storey block and how it would not fit in with the townscape and completely contradicted the Conservation Area status of its surroundings. One resident said, 'If I wanted to paint my house red you wouldn't allow it but you allow this monstrosity to be put up!' 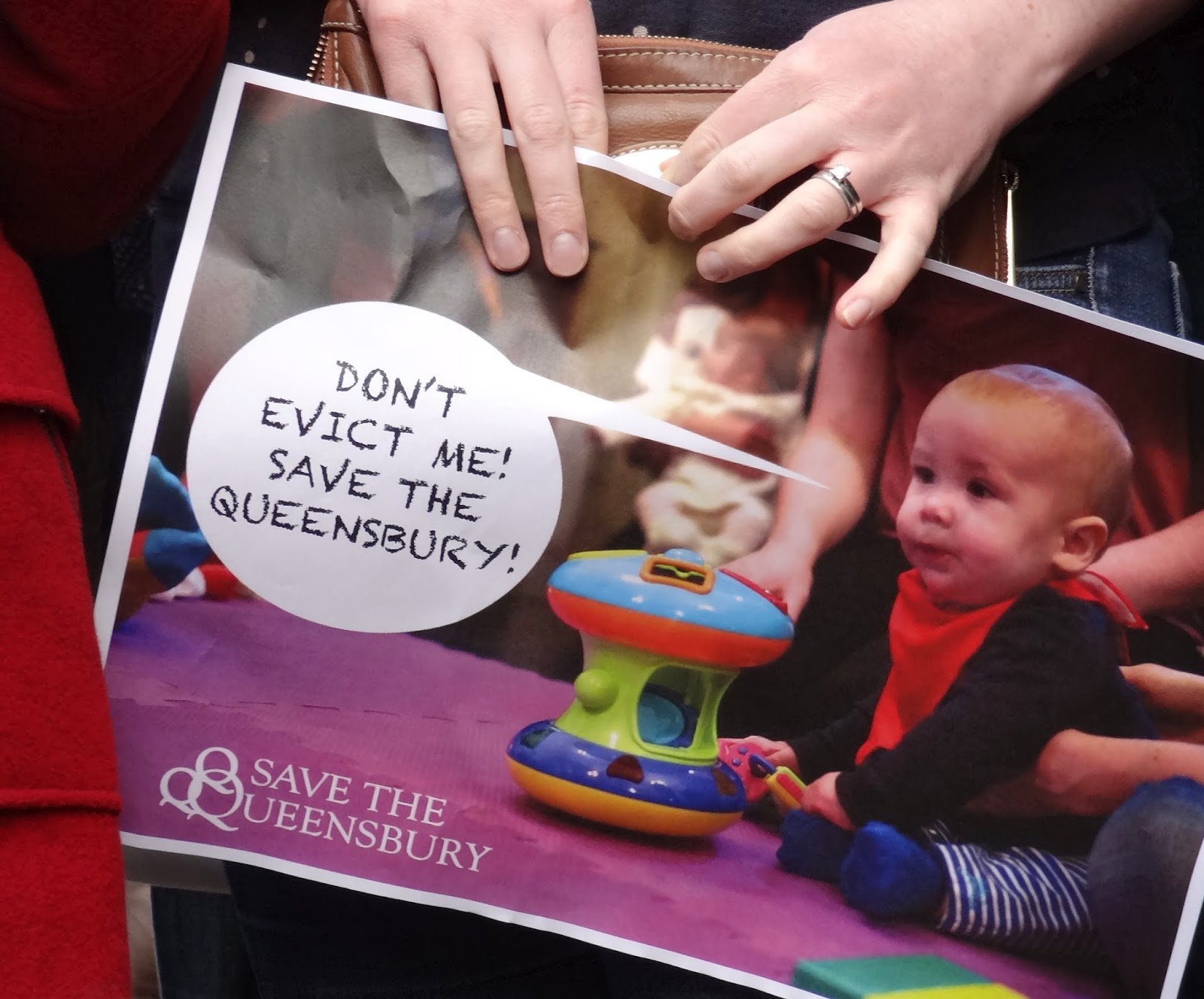 Concern was also expressed about the provision of interim accommodation for Busy Rascals with recent proposals dismissed as cosmetic.

The decision about the future of the Queensbury will be made at the Planning Committee meeting which takes place at 7pm at Brent Civic Centre (directions here) on March 12th . Again your presence is needed.

Anyone wanting to travel together to the Planning Committee meeting on 12th March should meet at Willesden Green station at 6.15pm.

Applications to speak on the issue at the Planning Committee should be made to:
Joe Kwateng, Democratic Services Officer  020 8937 1354

Sounds like it was a great turnout and any councillor voting to approve this ridiculous development should be very scared of these formidable campaigners.

What an interesting contrast though between the concerns of Labour candidate Tom Miller and the independent Make Willesden Green candidate Alex Colas - quite revealing I think.

'Tom Miller, a prospective Labour candidate in the local elections said it was a valued meeting place for young professionals like himself to meet'. Jesus. You sure he wasn't just sent by Labour to spout stuff like this in order to discredit the campaign.

Yeah, thanks for that Tom. With friends like these etc...

Bit unfair. I think Tom was making the point that the area is trying to change and the pub isn't just about the toddler groups that use it.

I was amazed that members of the committee didn't actually go into the pub, they stood outside and left after people spoke.

Councillors have a great deal to think about.

Do they go against public feeling or do a few brave Councillors accept both in Queensbury and Copland situations they have to make a stand for democracy and accountability challenging the current proposals ?

The ballot box is where we can all vent our anger if Councillors do not challenge current proposals.

Let see who is brave enough to stand for THE PEOPLE!

Not necessarily the case. Planning applications need to be decided according to planning law and policy, not public opinion. But there is more than enough policy to justify this planning application being kicked out and the pub being preserved - policy on the Mapesbury Conservation Area, policy on overdevelopment, policy on levels of affordable housing, policy on protection of community spaces, policy on Assets of Community Value.... actually its a pretty long list!