Lib Dems challenge Brent Council: 'Whose side are you on?' 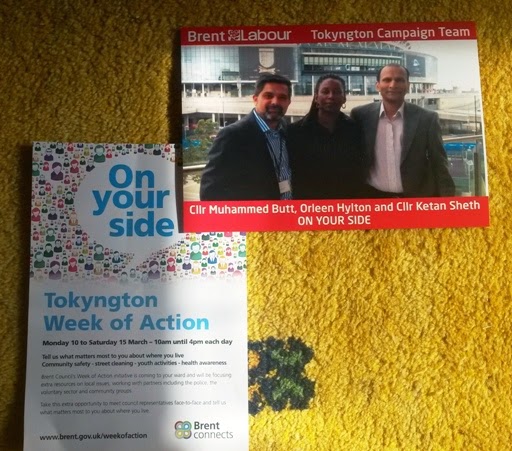 Councillor Paul Lorber, leader of the Liberal Democrat group on Brent Council, has protested to Christine Gilbert, Acting Chief Executive, over a Brent Council leaflet that uses the same political slogan, 'On Your Side', as a Labour Party leaflet distributed in the Tokyngton ward.

I have criticised the Liberal Democrats in the past for what I saw as 'dodgy leaflets'  LINK and they are no angels in this regard, but this connection between the Council itself and a pre-election party campaign is something new.


I did think it very odd that so much of Council Staff  time was being spent on the week of action in Tokyngton Ward just over 2 months before the local elections.

The Sudbury ward working officer seemed to be taken off normal duties to concentrate preparing for the event. Clearly Council Officers could not possibly afford to get things wrong in the Council Leaders’ ward.

I am sure that you will have a very  logical explanation as to why thousands of pounds of officer time and Council resources are used in this way.

However I do not believe that you will have a valid explanation as to why Labour election slogan then get used in Council paid for publicity for this event.

Needless to say the Labour Party could not miss the opportunity to put out their own leaflets at the same time taking advantage of the thousands spent by the Council.

Please confirm the total cost in officer time and all direct costs on this ‘political’ week of action and explain why it was allowed to be hijacked in this obvious and unacceptable way.

Then please explain the action you will take with the individuals responsible for this abuse.

The earlier 'Willesden Green Week of Action' also encountered criticism and led to a FoI request about costs but officer time was excluded from the information  provided by the Council LINK
Posted by Martin Francis at 17:45:00

if a person is elected to serve and decides to use their responsibility in order to gain more than they are entitled to regarding expenses does that reflect someone who is living up to the slogan they use such as "on your side"?
or does it reflect someone that isn't taking their responsibility seriously and is actually taking the people they are meant to be serving for granted?
is it really a wonder that public trust is at an all time Low when it comes to cllrs and politicians?
after all if this is what democratically elected people are doing then it is natural that the public would lose faith in them.
and so I believe that to start questioning the integrity of ones opponents when the reality is the entire system is stained by corruption is laughable.

what makes you view the Brent Lib Dems in that way Anon?
What Do They Have to Do To Help Change your Feelings @ Present?
and Who Does Have your Faith and Respect in Brent and Why?
I assume it is because They Do what The Lib Dems Don't?

I am so sick of all the political parties having digs at one another. If only they'd use the same resources into residents' needs. Paul Lorber has at least been trying to keep a local library open for residents and that, to my way of thinking, says a lot.

Christine Gilbert is just doing what she was hired to do. She is on Labour side.

But Anon,
They will undoubtedly defend their decisions by saying that it is justified due to budget cuts by the government.
Therefore They are left with little choice than to start closing down libraries.
They of course knew that their decisions wouldn't go down well with the People in Brent
But The Tough Decision Had to be Made.
I'm Also Sick of this game that the Political Parties Play By Having digs at each other in the hope that it will win them votes come election day.
But this is the norm Anon and I can't see it changing anytime soon.

Wasn't this because of Lib Dem-Tory government taking plus £100m from Brent budget?

Kick em all out perhaps we might then have true democracy with those elected actually standing for the people.

The only problem who do you vote in if you can't trust the 3 main parties ?