The report on Housing Supply and Demand LINK going to the Brent Cabinet on Tuesday 26th August starkly sets out the extent of the housing crisis in Brent.


Homelessness is on the rise and largely attributable to the ending of Assured Shorthold Tenancies in the private sector.  It is particularly high in Brent compared to other West London boroughs. 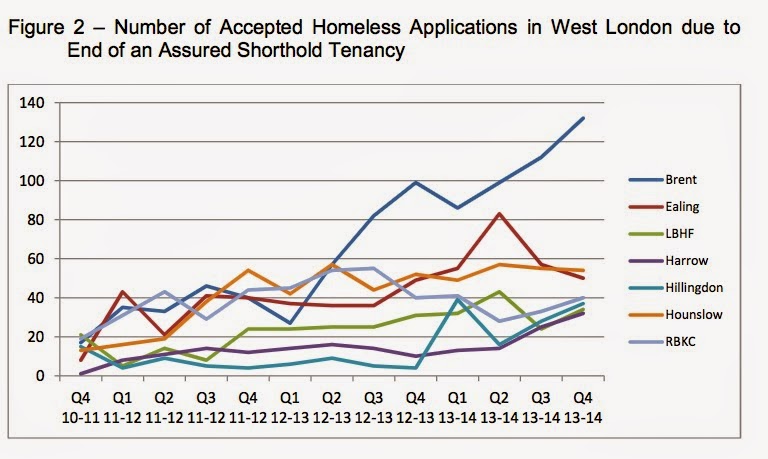 The Local Housing Allowance (LHA) cap has seen landlords withdrawing from renting to those families in receipt of benefits. It also means that the Council is unable to procure properties in that sector for homeless families.

The report says that the caps make it unaffordable to rent in the South of the borough for families who require two bedrooms or more, unless they are in receipt of Working Tax Credit and therefore exempt from the Overall Benefit Cap. Lack of supply means that there are not properties available in the South for working families and landlords in the North of the borough are unwilling to let to people on benefits.

This has meant that the number of private rented properties the Council has been able to find to prevent homelessness has fallen from 548 in 2010/11 to 164 in 2012/13.

The Overall Benefit Cap (OBC) introduced in August 2013 for workless households limits the benefit payable to families to £500 per week and £350 for a single person.  Brent has been one of the boroughs in the country most affected with 1,340 families capped by the end of 2013-14.

Approximately 950 had the cap removed during the year, predominantly through securing employment and qualifying for the Working Tax Credit.

Because of the high rents in London, the reports says that the Council will not be able to procure affordable housing to meet the demand from homeless households in Brent. They are instead looking for accommodation which 'is most likely to be outside of the borough and to a significant extent outside of London'.


If a household refuses an offer of suitable accommodation in the Private rented sector (under the provisions of the Homelessness [Suitability of Accommodation ](England) Order 2012) in the private rented sector the Council will consider that it has met its duties under homelessness legislation, and if the household are being accommodated in Bed and Breakfast accommodation, they will be given a reasonable period in which to make their own housing arrangements.

Couched in official language this seems inoffensive but it is the provision that sees families separated from relatives, friends and community and moved miles away with the resulting disruption to support networks and schooling. But see 4 below.

The Council is also working with 18 private sector accommodation providers to provide housing units in 'cheaper parts of the country'. This has resulted in increased out of borough placements, particularly for larger households.


This figures is expected to rise further due to the increasing demand pressure and the shortage of affordable supply in the borough.

All these pressures means, as local newspapers have reported LINK, that Brent is not compliant with legislation which restricts a family's stay in Bed and Breakfast accommodation to 6 weeks.  The number of households in B&B has increased to an average in 2013-14 of 299 per month. The report says this is due to the 'rising number of newly accepted homeless households and existing homeless households evicted from leased temporary, predominantly because the Landlord wants the property back.'

Another financial pressure on the Council is the 460 households living in temporary accommodation who are affected by the Overall Benefit Cap. This means their current accommodation is unaffordable and the Council has to make it up with Discretionary Housing Payments (DHP).

The report states: 'This is not sustainable position for the households or the Council, with no guarantee that the DHP budget will remain at the current high level in 2015-16 and beyond.' The Council is looking to address the issue through helping householders find work, securing affordable housing or 'by sustainably being able to cover the shortfall.'

As you read the report you cannot avoid feeling angry at the dire housing situation successive government have left us with. The selling off of council housing, the failure to build new social housing, the house price inflation induced by banks, estate agents and governments have combined to leave many families facing an impossible situation. I have seen at first hand in the schools where I am a governor what this means in real terms. Some of you may have seen the families, complete with suitcases, sitting in the glitzy foyer of Brent Civic Centre waiting to hear their fate.

Faced with this impossible and deteriorating situation, exacerbated by another round of severe cuts to come in the next few years, Brent council puts forward some ideas to address the problems. These include:

1. The Council will use 'proxy bidding' for capped householders who have been waiting longer than average for social housing to maximise their opportunities.   This means bidding on their behalf when possible housing comes up.

2. Consultation has begun on the possibility of making direct offers to those affected by the Overall benefit Cap provided they have been waiting longer than average.

4. Before households with children are located outside the borough there will be a review of each individual case.'If a household is identified as having to remain in Brent due to exceptional social care, welfare, medical or other exceptional circumstances, then DHP funds will continue yo be used to meet the shortfall in rent while a longer term solution is sought.'

Clearly 4 leaves a substantial area of potential debate over what constitutes 'exceptional needs' with budgetary constraints always lurking in the background.

The report states that in 2014-15 there will be a projected 673 lettings into social housing (Council and housing association) but this will meet only around 14% of the current total demand from Bands A to C on Brent's Housing Register.  The majority will be through re-lets of existing  social housing stock but the Council expect another 180 to be delivered via the new build programme.

The Council plans to increase the numbers of lettings to homeless households to 80% of the total. They say this is necessary to mitigate the impact of the OBC on households temporarily in homeless accommodation that is no longer affordable, and to reduce the number of households in temporary accommodation generally.  40 units have been set aside for the decant needs of South Kilburn regeneration.

The Council will be consulting over a 4-6 week period on the following amendments to its Allocation scheme:

1, Auto-budding - which would set the system to automatically to bid for property, at the council's discretion, once the  households falls into a target group, for example, the top 10% by waiting time, per property size.
2. Restore household's right to retain their Band C Housing register status and continue to bid in Locata, after accepting a Qualifying Offer in the private sector.
3. Increase Council and housing associations' ability to make direct offers.
4. In homeless households adult children (over 21) will be expected to share a bedroom with a same sex sibling of any age.
5. Possibility of including adult children  as part of a transfer/down sizing incentive package.
6. Acceptance of change of circumstance through starting and sustaining work (9 out of 12 months) to be given additional waiting time.
7. The residency criteria ('continuously lived in Brent for the period of 5 years or more prior to joining the housing register') would also apply to households in temporary accommodation. This would 'dis-incentivise homeless approaches'.
8. Over-crowding to receive equal priority as homelessness.

(Full version in Appendix D of the report)

Some of these proposals are bound to be controversial but whatever one thinks of them, they can only nibble at the edge of the problem - the Council, and local authorties in general, do not have the resources to dealwith such an enormous and escalating crisis.

The housing crisis outlined by the report makes it essential to tackle the housing crisis at national level and increase the amount of social housing new build.  Locally surely it should mean no more new developments with luxury house aimed at overseas investor but instead the provision of properly affordable housing.

I Think that all of this was Inevitable Martin
since We Live in a system in which Money is the main motivator.
and the public are always the ones that are left in want as we can all see regarding a shortage of acceptable housing for poor people.
I can't help believing that this problem will get worse with time.