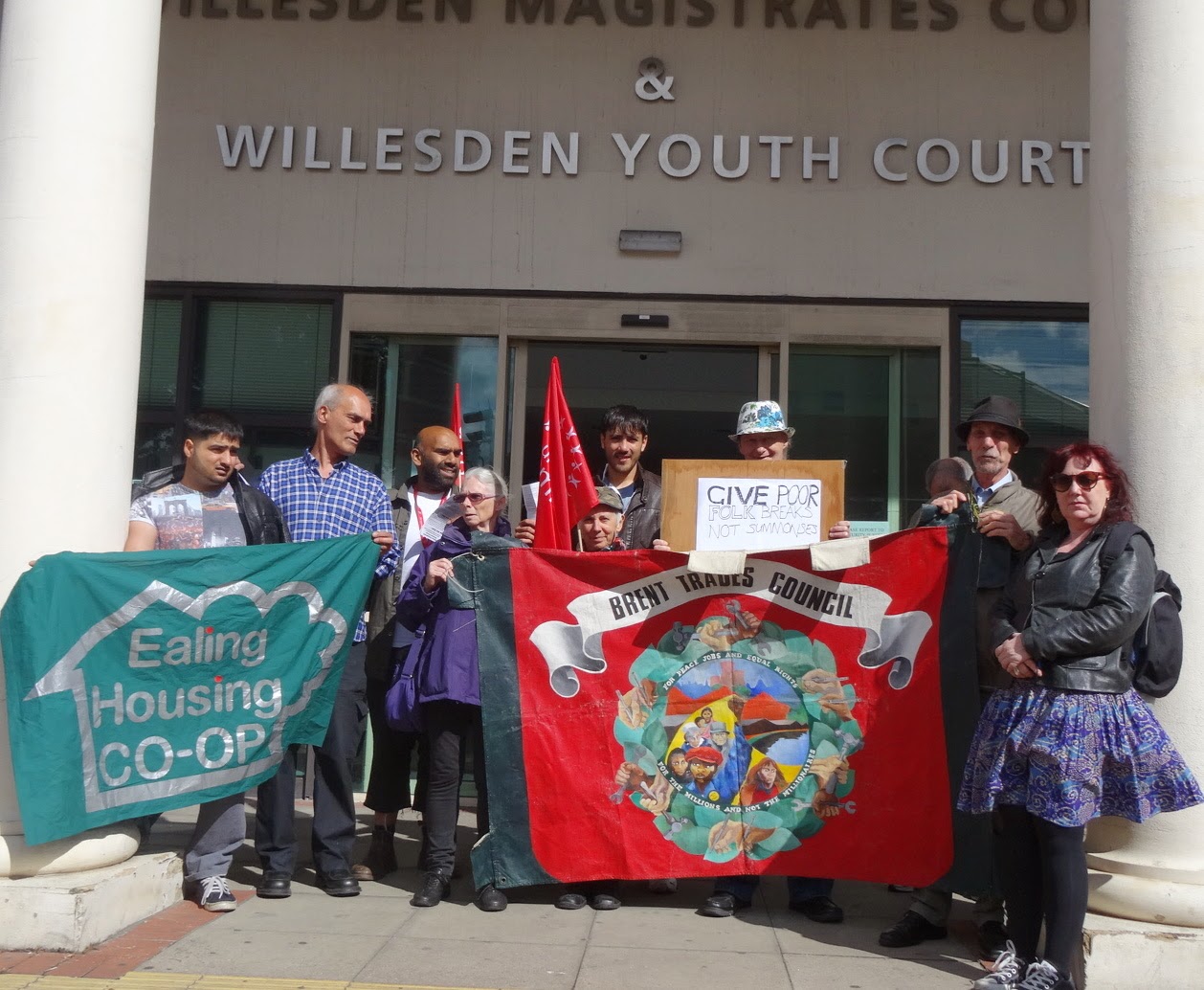 Following Council Tax benefit changes many residents who previously did not have to pay the full amount, and in some cases any, now have to pay. Brent Council's scheme expects more in payment than many other local authorities, some of which have chosen to maintain 100% council tax benefit.

Speaking to local residents as they arrived it became clear that these weren't the 'idle and feckless scroungers' as stereotyped by ConDems and the media.

They were often people on low pay or zero hours contracts who found themselves having to choose between paying their rent or paying the Concil Tax. Needless to say they opted to pay rent to keep a roof over their heads.

Previously Muhummed Butt, leader of Brent Council,  has justified the summonses as the only way to force residents to engage with the Council about their arrears. Today a Brent Council officer was in court to give advice before any formal proceedings and some residents came out having settled terms for payment or been referred for further help with benefits. One resident was complimentary about the helpfulness of the officer.

It does seem a pity that residents had to go to court at all, with all the associated worry and stigma, and I hope backbench councillors and the Opposition will explore with the Cabinet how to better enagage people before matters reach this stage.

Preferably of course it would be best to revise the scheme so that people are not faced with the unpalatable choice of having to choose between payment of Council Tax and payment of rent or purchase of food.  However, the Council approved the scheme earlier this year with only slight modifications, despite protests.

Council Tax (CT) is obscenely regressive - owners of (equally obscenely) expensive homes pay no more than those on average income. The question Labour cllrs have to answer, then, is why they aren't pressurising their party to back land-value tax at the forthcoming general election to replace the appallingly inequitable CT. Too many rentiers in the Labour Party's ranks or party too frightened to offend its petty bourgeois backers? Readers might like to check the parliamentary register of members' interests to see which Labour MPs are landlords! Link here
http://www.publications.parliament.uk/pa/cm/cmregmem/140428/part1contents.htm

It's back to the workhouse values, where the rates would be cheaper by getting people off poor relief, and hoping to save money by sticking the so-called parasites into disgusting workhouses. Brutality and rotten ideas were de rigueur then. So with politicians too scared to raise the council tax, despite inflation rising, and needs rising, the alternatives are taking money of the poor (deserving or not in this case) and of course selling public assets cheaply, with privatisation...but then the next years fall in grant monies will set the ball rolling again for the same but nastier things...it's the same scumbag politics of over a hundred years ago. which was debunked in 1948. One hope is that by seeing our so-called representatives neglecting us, solutions can be sought from elsewhere,(decent people/ideas) so these representatives can be wheel-barrowed into the nearest river- the same river they are selling us down!

I would rather be a so called feckless Scrounger than be a Chancellor That collects Billions in tax revenue(which is also blood money ) from something that causes 100,000 preventable deaths in Britain each year.