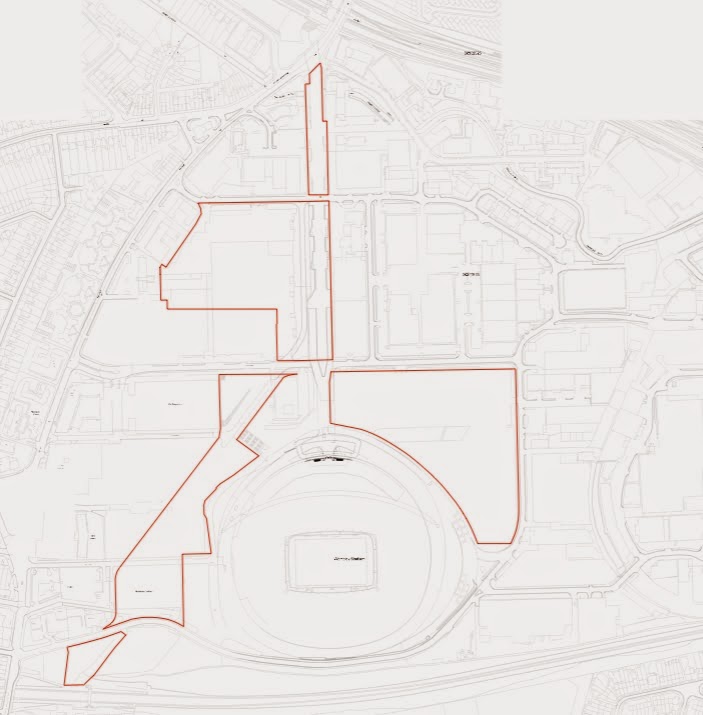 Following my recent blog on questions around the delivery of social housing at Quintain's Wembley it is interesting to see that Quintain are applying to Brent Council for a number of the sites around the stadium (above)  to be used for markets and other temporary events.

The Wembley Sunday Market on the 'Green' parking site has only recently closed. That market aroused controversy over the sale of counterfeit goods although it also enjoyed a great deal of support.

A new 250 stall Sunday market is due to open  on October 5th with the operators, Market Place, signing a code of pracice with Brent and Harrow Trading Services.

However, the new application goes much further in terms of market provision with uo to 500 stalls at any of several sites and will not be limited to Sundays.

Quintain is at pains to establish a more upmarket image to complement the London Designer Outlet and of course markets add colour and activity to derelict areas - but some of the spaces at least should be busy scenes of building the affordable housing so badly needed. The proposals may be 'meanwhile' projects to make a return for the developer and liven up the area but also seem to assume, and even embed, further delays.

This is the land included in the planning application: 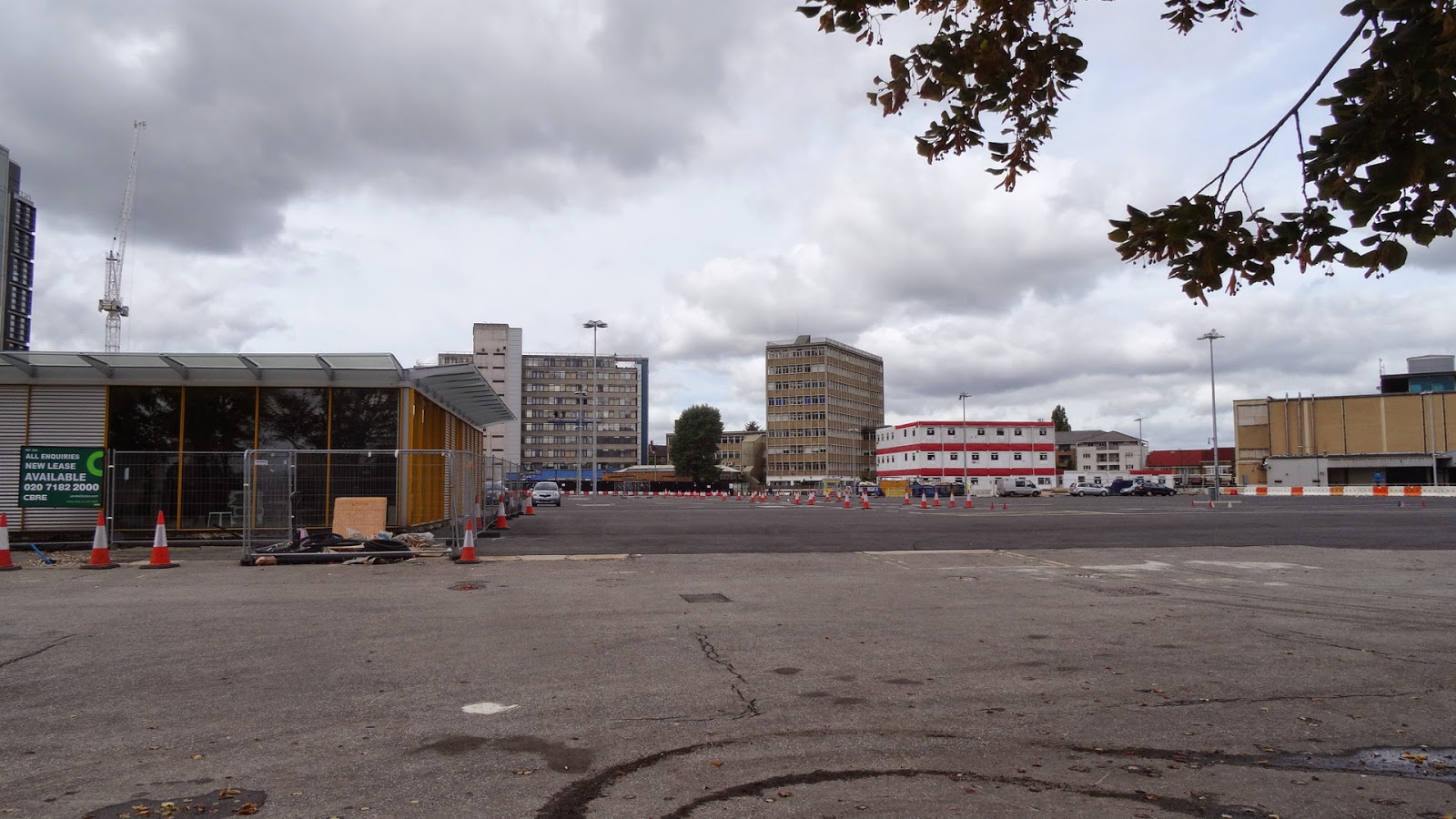 This planning application proposes the use of various areas of public realm within the Wembley Regeneration Area for markets and other temporary events. A variety of markets will be brought forward over time establishing a regular offer, which will bring repeat visitors, so the markets will complement and add to the retail attractions in Wembley. The markets will offer food and non-food items, including general products, clothing, arts/crafts, retro goods, etc.

It is envisaged that no more than 40% of the total offer over time will comprise food, of which a lesser proportion will be for immediate consumption. Themed markets are envisaged, featuring European and other overseas products, and seasonal markets will offer products for annual festivals, including Christmas, and to complement activity elsewhere on the Wembley Park estate, such as a parade for Diwali. Markets selling a variety of food and drink products, such as a French food market, would be located within an area currently designated under Wembley Park estates’ premises licenses.

Markets will not be hosted on Stadium Event Days without the prior written agreement of the Council. Some flexibility may be necessary to support seasonal markets, such as the Christmas Market, which are anticipated to be in place over a number of consecutive days. In any event, key routes to the Stadium, including Station Square, Olympic Way and Stadium car parks will be free of markets on Event Days. Any such coincidence would be discussed fully at the relevant Safety Advisory Group meeting in advance of the Event.

Markets will also be co-ordinated with large events at the Arena and Hilton and elsewhere across the estate; and it is also generally anticipated that only one market will be hosted on site at a time although complementary opportunities may arise on occasion. In any event, the maximum number of stalls on site at any one time will not exceed 500. Quality of all goods will be assured through the Real Deal charter between Retail Alternatives and Brent and Harrow Trading Standards.

The hours of operation of the various temporary events and markets will be reflective of the type of event being held. It is unlikely, however, that they would be operated before 08.00 am or after 00.00 am. The setup and breakdown, however, could be outside of these hours. There are currently no residential buildings close to the proposed sites, but there are some hotels on Olympic Way, Wembley Park Boulevard and South Way. Stall holders will be made aware of the locations of the hotels and considerate working will be required of them through management, including no shouting, engines not left to idle during set up, minimal movement of metal stall frames, etc. Erection of stalls close to the hotels would not generally begin before 07.00 am. Generators are not anticipated to be required close to them.

Stalls may be established in groups or individually in the various areas identified. Market stalls will generally be a maximum of 3m x 3m including the serving and storage area for the stall holder. Aisles of no less than 4m will be maintained between the faces of stalls. Emergency services routes will be a minimum of 4m wide. Whilst there are trees in some of the areas within the location plan, the stalls will be positioned so as not to affect the trees in any way.

Electrical power points are established in the majority of the areas. Where these are absent, such as in the car parks, generators will be utilised. These will be sited away from public thoroughfares and all cabling in public areas will be fixed above head height, or other, to avoid trip hazards. All refuse generated by the market will be stored well away from generators during market operation and will be cleared away at the end of the market / event and the areas cleaned, as currently, by the Wembley Park Estate team.

Market stalls will not be stored within the sites themselves in between markets since the spaces are used for other events and to support events at the Arena and Stadium. From time to time markets will be held over a number of consecutive days and in these instances the stalls will remain on the sites protected by patrolling site security. All market stalls and equipment will be cleared away from the market locations at the end of the run of each market and stored under cover elsewhere on the Wembley estate, such as within one of the empty retail warehouse units on Wembley Retail Park.

The markets will serve both the local community and those visiting from further afield. Visitors and stall holders will park in the existing Wembley car parks which are controlled by ANPR cameras. The Wembley Park estate is managed with the aid of CCTV and ANPR cameras. The markets and other events will be managed by Retail Alternatives in close liaison with the Quintain Wembley Park team. All events will be licensed, as appropriate.

This should be refused in particularly the areas earmsrked for future development on the grounds that the developer should be getting on and building and not sitting on these parcels of land.

"We will get Brent Building Again"

So lets see it then !