Cricklewood says 'Oh, no, not that lot again!' but ready to stand united against the SE Alliance 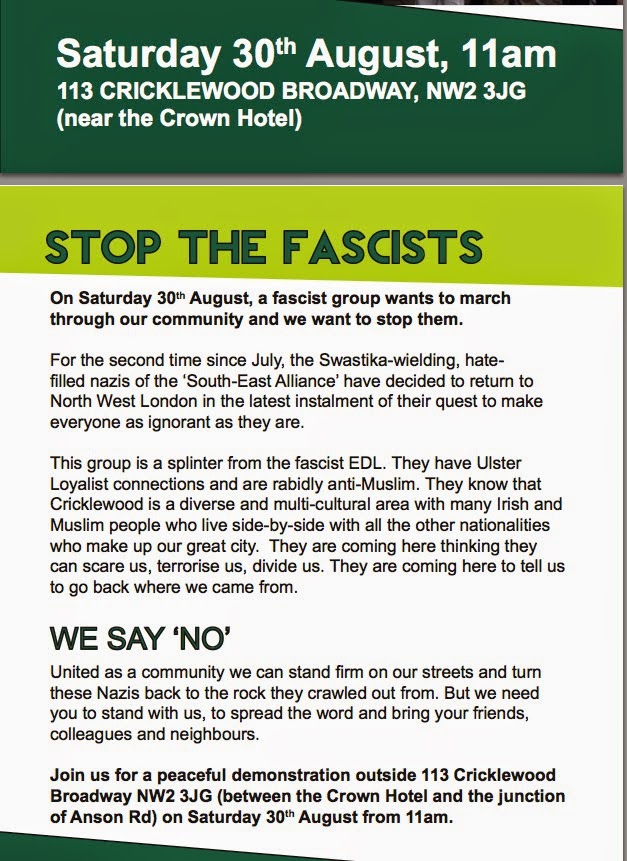 Most people I have spoken to in Cricklewood while leafleting about Saturday's 'Fascists not welcome here' demonstration have reacted with disbelief that a group that has so clearly failed to muster any support is coming to disturb their neighbourhood again.

However, they were once again (with a bored sigh) prepared to see them off again.

Only a handful of the South East Alliance turned up last time with a massive police escort and many more police were parked in vans in side streets ready for any trouble. The SEA were opposed by hundreds of local people with Brent Council leader Muhammed Butt and prospective Labour candidate Dawn Butler also in attendance.

Shopkeepers and families in flats above the shops were especially fed up when they heard the news which will mean four summer Saturday's disrupted for them.

The SE Alliance and their motley group of associates will try and exploit recent events in the Middle East and in Rotherham to try and muster additional support so North West London United is again mounting a peaceful counter-demonstration to show that the community is united.

Supporters should get down to 113 Cricklewood Broadway, opposite the Crown Moran, for 11am on Saturday morning.  Placards ridiculing the SEA would be particularly welcome.

I'm sorry to spoil your love nest at Cricklewood, but English people have every right to object to an organization which seeks to ultimately have England under Sharia law! Actually, apart from that we have a right to defend our Christian heritage from Islamists, which thanks to people like you, are now thriving in the UK. See you there!

Anon,
Do you actually Know what The purpose of Christianity is?

Surely you recall the beatitudes? "Blessed art thou who gets bevvied up in Wetherspoons before spouting pig ignorant shite for an hour or so"?

I am so sick of this sharia law argument. Cameron is helping kill Muslims in Palestine y the heck do u think there is ever any chance of them turning the UK into a Muslim state?????

One has to question the sanity of a group that persistently come in tiny numbers to demonstrate against an organisation that is not in the targeted building and has not been there for many months, if they were ever there at all.