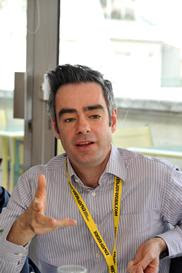 His portfolio has expanded over his term in Brent to cover regeneration, planning, council housing, adult skills, environmental health, school expansion and the sale of some of the Council's own property. His approach to regeneration has often been controversial as a result of his view that the role of the Council is to smooth the way for developers. LINK

He is Deputy Chief Executive in addition to these roles. He is also a founder board member of The Future of London and Chair of the Meanwhile Foundation, a national charoty set up by Brent Council.

During his tenure there have been major regenerations in Wembley (Quintain), South Kilburn, Park Royal and Alperton.  The high rise skyline of Brent will be his most visible legacy. Among the more controversial schemes have been the school expansion/new housing that saw the closure of Stonebridge Adventure Playground and the Willesden Green library development which resulted in luxury flats being sold at inflated prices in Singapore.

His predecessor at Redbridge, Roger Hampson, had a salary of £193,301.

Given your list of his achievements, 'Rejoice!' might be an appropriate response; except that it's highly unlikely he'll be replaced by someone who has a healthy loathing for 'developers', resists flogging off more of our heritage to far east investment capital, wants to keep the height of the built environment to an appropriate scale rather than using it as wish-fulfilment for his own manhood, or who gives a shit about kids' playgrounds.

You got there first.

Thanks for the tip off. I've blogged it.

I bet he doesn't live in Brent

On the contrary, he's been central to ensuring only people on his kind of pay can afford to live here.

good riddance, they are welcome to him

Thank God he's gone from Brent the last of the a rotten bunch!

Beginning to recognise already that Redbridge's loss may well be Brent's gain. Glad I stood down as a councillor in Redbridge 10 years ago after 24 years. Starting to look like time to move away.

I'm a bit late to the game here, but I live in Redbridge and so far Andy Donald has done little else but sack all of the experienced Directors who knew the borough and instead, introduced a 'dream team' of highly paid personally ambitious youngish executives including one individual who led a think tank! What flaky schemes are now in store is anybody's guess.

From what I've witnessed so far, the situation is dire and bound to get worse. Brent's gain is indeed Redbridge's loss.

Unfortunately the strategy Donald put in place here in Brent regarding the Council easing the way for developers is still intact and resulting in poorly planned speculative tower blocks, unaffordable for locals, being built haphazardly all around Wembley Stadium with a 26/21 storey twin towers block just up the road on Wembley High Road.