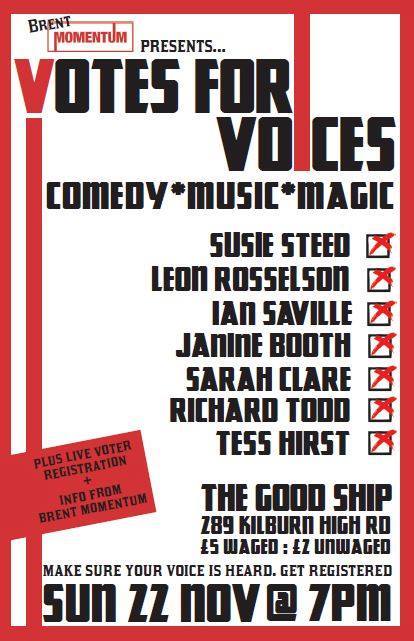 The new Brent Momentum organisation has launched a campaign to persuade more people to get registered to vote following the loss of thousands from the electoral register following changes to the registration system.

The Votes for Voices gog is partof that campaign.  Brent Momentum has asked that Wembley Matters advertise the event.

They have not yet made up their minds on whether to admit members of other parties who stand against Labour in elections, such as the Greens, to the organisation which is still very much in its early days.

Momentum grew out of the swathe of new members who joined the Labour Party  in order to help elect Jeremy Corbyn to the Labour leadership.
Posted by Martin Francis at 15:37:00

Comedians for Corbyn as he is making the Labour Party a joke. The sooner Mary Creagh or Simon Danczuk take over the better.