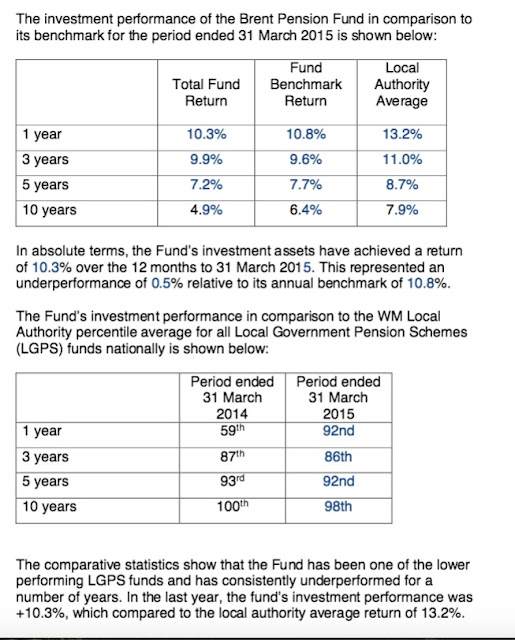 The Brent Pension Fund Sub-Committee of Brent Council is one of those committees which gets quietly on with its work with little publicity or indeed public recognition. The Annual Report from 2014-15 from which the extract above is taken LINK does however deserve a wider airing. Brent is shown to be underperforming compared with other local government pension funds.

Clearly investment decisions have to be made on the basis of security versus risk but Scrutiny Committee may wish to have a closer look at how this operates in Brent.

Benefits are funded by contributions and returns on investment so this is a vital issue. As well as council employees in the scheme (4,179) there were (March 2015) 33 other employer organisations in the scheme (1,724). This includes, individually, schools which have become academies.

Until such time as Mr Osborne slays the deficit, balances the books and gets us into surplus and a position of long-term economic security, it is a matter of patriotic duty that NOBODY retires. Remember: we're all in this together (though some are more in it than others).