Brent Council leader Cllr Muhammed Butt,  wrote on 'Muhammed's Blog'  'Two events to enjoy and two ways to do your bit'  on the Council website. One of the 'events to enjoy' was Modi's appearance. LINK:


Hot on the heels of welcoming record breaking crowds to Wembley as part of the Rugby World Cup, Brent is looking forward to more important visitors next month.

Wembley stadium will play host to the Indian Prime Minister Narendra Modi on Friday 13 November. The event is set to welcome around 55,000 people from all over the UK in an invitation only event. It is expected to be the largest reception any foreign head of government has ever received in the UK.

Cllr Butt, or perhaps the Brent Council communications team, blithely ignore the controversial aspect of the visit, although perhaps they should have been aware of the rage evident outside Brent Civic Centre when Barry Gardiner invited Modi to the UK before Modi's election. LINK

Since Modi came to power there have been allegations that he has created division in the country. He has just conceded defeat in the Bihar election in which he took a major role.


A sitting Indian PM rarely gets too involved in state elections; Bihar's vote was unusual with Modi making numerous stops and dozens of speeches on the campaign trail.

The defeat represents a second loss of face for Modi's BJP this year, after it lost state elections in Delhi in February. Only last year the BJP swept to power in national elections, winning a rare majority of seats in the country's lower house of parliament.

Bihar's vote has been a particularly divisive election, with the BJP accusing its opponents of pandering to Muslim voters, and of not being reverent of cows, an animal Hindus consider holy.

The ugly back-and-forth contributed to a larger national debate about rising intolerance. In recent weeks, as many as four Muslims have been killed across the country on suspicion of either consuming or transporting beef.

This morning the BBC Radio 4 Sunday programme had a segment about the visit which summarises the issues:


Human rights activists are holding a demonstration 'Narendra Modi Not Welcome in London' in Downing Street  and then Parliament Square on Thursday November 12th at noon  followed by a meeting in the House of Commons. 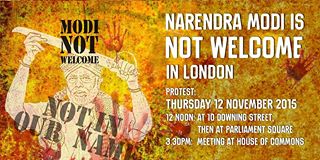 The event, deliberately timed to coincide with the Hindi festival of Diwali,  is highly unusual in Britain and although not organised by Modi or the Indian Government is aimed at securing his position as a major world statesman. It follows similar events in the US and Australia.

This is how NDTV LINK reported the event:


A starry show is planned in London next week and no, Bollywood is not headed there. Two days after Diwali, the highlight of the huge reception planned for Prime Minister Narendra Modi at the famous Wembley stadium will be a spectacular fireworks show after the PM's speech.

Bollywood will be represented at the hour-event only by singer Kanika Kapoor, who has sung popular songs like Chittiyaan Kaliyaan and Baby Doll, and a performance by the London Philharmonic Orchestra will be another highlight.

But mostly, organisers of the Wembley event told NDTV, the programme will feature performances by Indian school students from across London. Hundreds of students have been preparing for the last two months.

"Groups of children of about 50 from each school have come together and have choreographed their acts specially for the Prime Minister's programme,'' said Vijai Chauthaiwale, who heads the BJP Overseas Cell.

Mr Chauthaiwale flies out tomorrow to London to oversee final preparations. At least 55,000 people and 400 media persons are expected to attend the show and UK Prime Minister David Cameron is likely to accompany PM Modi for it.

"The theme is the diaspora, their journey from places like Uganda to the UK,'' said Mr Chauthaiwala, who also helped with the last two community events abroad for the PM.

PM Modi leaves for UK on November 12, a day after Diwali. His first visit to the country since he took office is likely to include lunch with Queen Elizabeth at Buckingham Palace on the 13th, the same day as the reception at Wembley.

The Prime Minister has been hosted by the Indian community on most of his visits abroad, and organisers have vied to make these grander than the last.

The reception at the Madison Square Garden in New York last year has been held up by many as the gold standard so far. 18,000 people had attended that event. Almost the same number attended the reception for PM Modi at San Jose in America's Silicon Valley this year.


The over the top nature of the event, the sycophancy on display by some MPS, along with right-wing nationalism and near worship of the 'leader' leaves me with a sense of disquiet, especially after the Chinese and Egyptian visits.

I trust that McDonalds will close all its Brent branches on the day, both as a mark of respect for the cow and as protection for its patrons and its premises from some of His Excellency's more zealous followers.
Mike Hine

Modi addressed almost 30 election rallies in Bihar and polled 30% of the vote. Modi brand has failed in Bihar so did cow politics. In the last BJP govt it was Ram Mandir now its cow. BJP is Hindu version of Talibans.

Does the wealthy Football Association, owner of Wembley Stadium, realise what it's doing by hiring its turf out for the Modi visit? Here's a link to an excellent piece by the Guardian's Aditya Chakrabortty