Vote NO to British airstrikes in Syria - join the demonstration today 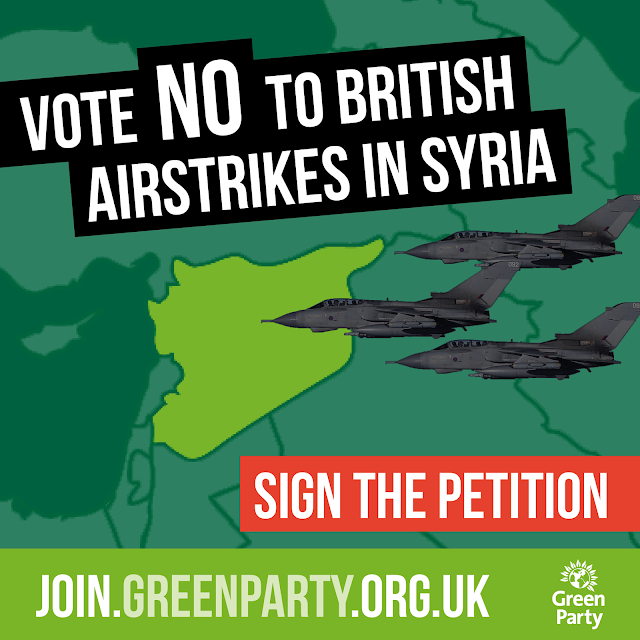 Next week MPs are likely to vote on whether the UK should carry out airstrikes on ISIS in Syria. The Green Party stands united on this issue – dropping bombs is not the answer.

Sign this petition urging MPs to vote against British bombing in Syria: http://bit.ly/1Ncy6WK

We cannot ignore recent history and the consequences of our previous military intervention in the Middle East. The government has not given clear answers to questions over how British airstrikes in Syria will increase our security here in Britain or help bring about peace in the region.


Instead of escalated military invention we need to step up our diplomatic efforts to choke off ISIS's finances, weapons, and recruitment. We should also suspend British arms sales to the Middle East and keep to our commitment on taking in Syrian refugees.

If you'd like to know more about why we're against bombing Syria Caroline Lucas was on BBC PM yesterday explaining why she'll be voting no, you can listen to that here: https://t.co/RjTe5rd8XV (about 39 minutes in).

There is a protest tomorrow in London where Shahrar Ali Deputy Leader Green Party will be speaking. Details here, feel free to share details of local events also: https://www.facebook.com/events/1520504624933948/
Posted by Martin Francis at 19:33:00

I am against bombing Syria .

No bombing in Syria . Stop