The First Reading of the Budget will take place on Monday at Full Council.  The report details a wider measure of uncertainty that usual regarding the impact of government legislation as well as specific figures from government. The report suggests that things should be clearer in time for the January 2016 Cabinet Meeting. The budget is due to be approved on February 22nd 2016.

Today's suggestions that the Chancellor in his Autumn Statement may allow councils to increase Council Tax by 2% to relieve the pressure on adult care provision is a further complication not covered by the report.

The overall forecast of council income is illustrated by this table from the report:

RSG = Revenue Support Grant. Money paid directly to local government from central government
BRTU= Business Rates Top Up again from central government, but the system is changing, ostensibly to allow local councils to retain more but resulting in a loss of income to local councils
NDR=Non Domestic Rates, affected by an increase in appeals against increases in ratable value
Council Tax Base - this has improved through increase in the number of properties in the borough, a decrease in the value of council tax discounts to residents and improvements in collection rates (although these have deteriorated again recently). These figures will change if the Council Tax is increased by 2%
NBH= New Homes Bonus is paid to councils for completed homes but this year it was top sliced in London boroughs to pay for Local Enterprise Panel projects.

The long term funding issue remains dire with a continuing decline in the Revenue Support Grant putting the very future of local government in jeopardy. 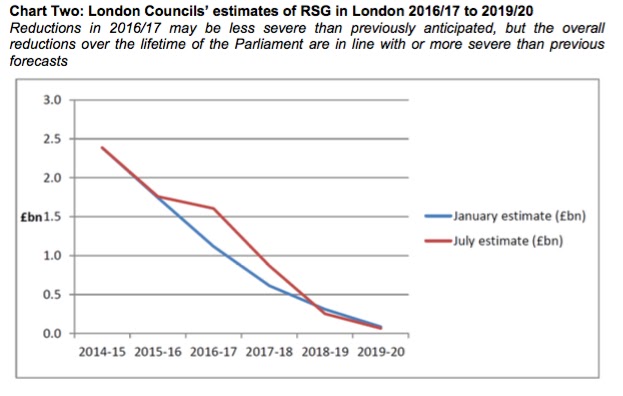 The July (red) line reflects measures taken in the Conservative Government's July budget but as can be seen the reduction accelerates again in 2017-18.

Probably the most likely scenario is that the pace of general fund financing reductions in 2016/17 will be less steep than previously assumed, meaning that the council can set a balanced budget for that year without the need to agree additional savings proposals. However, thereafter the scale of reductions is likely to accelerate, and so any gains in 2016/17 should be regarded as strictly temporary.

'Additional savings' means in addition to the substantial cuts for 2016-17 agreed last year which in summary are: 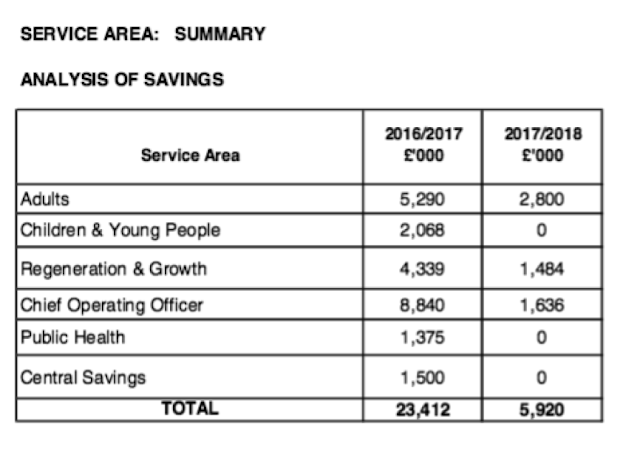 The full list can be found in the PDF at the end of this posting.

The report does suggest that further savings be identified for 2017-18 on a contingency basis: