Brent Council has announced that the council by-election is to be held in Kensal Green Ward on Thursday 17 December 2015. This follows the sad death of Cllr Dan Filson last week.

Nominations for candidates must be submitted to the Returning Officer at Brent Civic Centre by 4pm on Friday 20 November.

The person elected on 17 December will be in place for the remainder of the standard four year term of office for a councillor, until May 2018, and will serve alongside the other two councillors elected to that ward in May 2014.

Anyone eligible but not currently registered to vote has until midnight on Tuesday 1 December to register if they wish to vote in the by-election.

Anyone already registered but who wants a postal vote has until 5pm on Wednesday 2 December to submit an application form, which they can get by emailing electoral.services@brent.gov.uk.

Alternatively a form can be downloaded at www.aboutmyvote.co.uk.

Brent Conservatives have been quick off the mark selecting Christopher Alley to contest the seat, presumably on the basis that he can handle a sandwich with panache! 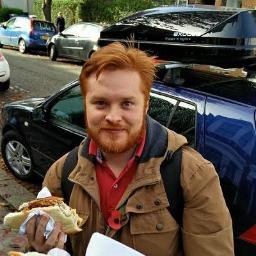 Labour Party members interested in standing need to be free next weekend for interviews and have until 6pm on Wednesday 11th November to return their nomination papers. The papers are available from grover.robert2@gmail.com

It will be interesting to see Brent Momentum's impact on the selection.

Are you eligible to stand? Details HERE

'Brent Conservatives have been quick off the mark selecting Christopher Alley to contest the seat.'

Martin, can you, or someone from the Conservative Party, please clarify which branch (Brondesbury Park or Kenton) of the Brent Conservatives Mr Alley will be contesting the seat on behalf of? Thank you.

Cllr John Warren has responded to my request:

Chris has been selected by Brent Central Conservative Association and is fully backed by Central Office.

How long have Tories been looking like that? You sure he's genuine?

Are any Tories genuine?

How do we determine what resembles a Tory?

With full marks on the above he could be the next Boris Johnson.

The impact Brent Momentum will have on the selection? Calderbank will feel a different kind of Mo-mementum of the Butt-kicking kind. We may as well get Powney back from the wilderness.

I'm not so sure. He looks like one of those extreme left Corbynista
entryists I've read about. Today the Labour party, tomorrow the commanding heights of Brent Central Conservative Association. Time for all decent mainstream Conservatives to reclaim the party for moderate and sensible bigotry before it's too late!

Worth noting that the new Corbynistas can't vote in this selection, they need to have been a member for 6 months. Looks like we'll be stuck with the same old crap as we had before.