It was clear from the warm tributes paid to Dan Filson from all sides at Brent Council that he will be a hard act to follow.

In terms of the Scrutiny Committee that task goes to Cllr Matt Kelcher (Kensal Green) who was named as Filson's successor tonight. Later in the meeting he used a debate on PCSOs to make an undisguised party political broadcast on behalf of the Kensal Green Labour by-election candidiate Jun Bo Chan.

Whether he measures up to the criteria I set out earlier LINK  I will leave to readers to decide. His career trajectory is similar to many who go from university via well worn paths into politics with Parliament the ultimate goal.

Kelcher is proud of the report he write for Scrutiny on CCTV LINK   The increasingly semi-detached Cllr Janice Long joins Scrutiny to fill the place vacated by Kelcher's elevation.

This is from Cllr Kelcher's LinkedIn profile: 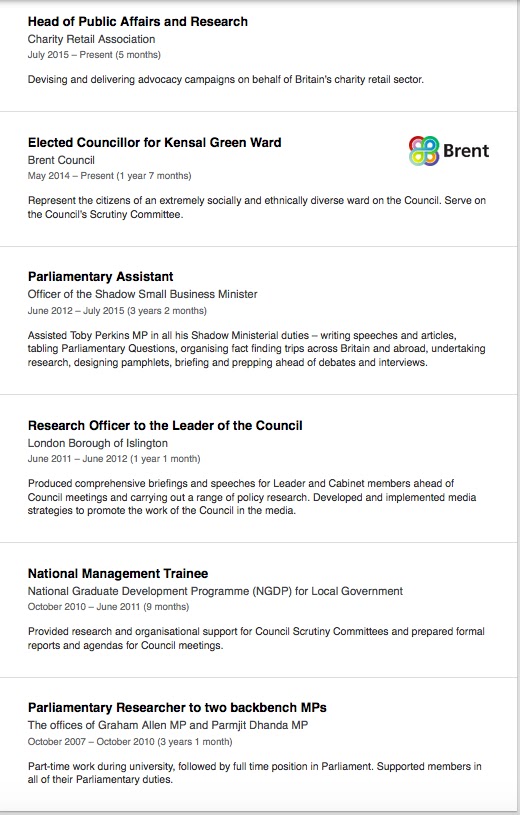 how old is he?

Interesting about Janice Long. Just before the 2014 local elections, she remarked that if she didn't get in for Dudden Hill, she'd not be campaigning in Brent Central but in some other marginal. She's certainly seemed very weary of it all when I've met her on odd ocasions over the last year or so. And for the record, I rather respect her. She digs deep and thoroughly into issues before deciding what her position is.

As to Kelcher. Oh heavens. Another one who has never had a "proper job".

A career politician has just the qualities Cllr Butt requires to provide 'scrutiny' to council business.

Butt will be livid. He spent yesterday phoning backbenchers and ordering them to vote for Sabina Khan

This is an interesting comment. If true, it reinforces the view that the Council Leader prefers not to send emails, or any other written document which could be 'used in evidence against him'.

I welcome the news that Cllr. Janice Long has been chosen to be a member of Scrutiny Committee. From my limited knowledge of her, she appears to be willing to consider matters independently, which is important for a body which is meant to scrutinise the decisions of those in power at Brent Council.

His entire political career lies in the future and will be dependent on his not offending, not provoking, not questioning, not dwelling on things which others have decided are ok. He has no past record which would possibly have given him some intrinsic weight and authority. He will depend on the patronage of others.
What was the job description again?

Butt was not only phoning backbenchers personally, but he was leaning on other councillors to do the same.

The man has literally or no regard for democracy or transparency. Only a matter of time before he mis-steps fatally...

Sounds like she might be kept quite busy scrutinising the degree of scrutiny exercised by the chair of the Scrutiny Committee.
Mike Hine

It may be 'only a matter of time', but if this affront to democracy and transparency is to be brought to an end, it does need people to put their allegations to an appropriate authority (Standards Committee?), and to be willing to put their name to those allegations.

I realise that not everyone is in a position to do that, particularly if they are observing such behaviour from a role where trust and confidentiality are paramount requirements. If you are in such a role, please do not take my remarks as personal criticism.

I don't believe age should be an issue. It is effectiveness that counts but for the record he left school with A levels in 2004.

I recall that Cllr Kelcher's Twitter bio once included the phrase 'democracy whenever practicable' - it was deleted it after it came to public attention on Wembley Matters. Worrying, though, that the chair of a scrutiny committee should hold such a view. Or perhaps he's changed his mind...?

'whenever practicable' sounds like a hopeful aspiration for the future. Good to see a positive thinker in a position of responsibility. Perhaps he'll let us know when practicability looks imminent.

That CV indicates to me that the most important thing for him is his political career and therefore promotion. Logical next step would be a Cabinet position on Council. Getting that wouldn't'[t be helped much if he rocks too many boats as chair of Scrutiny. Hope I'm wrong, but experience says unlikely. Anyone know when he will have to spell out his agenda for scrutiny?

Some members of Kilburn Unemployed Workers Group have met with Chair of Resources and Public Realm Scrutiny Committee and Cllr for Kensal Green which has Harlesden Jobcentre in his ward, in connection with the KUWG's concern over closure of Kilburn and Neasden jobcentres. He told them that he knew nothing of the proposed jobcentre closures.

If his predecessor Dan Filson will be 'a hard act to follow', what did Dan Filson know of the proposed jobcentre closures?

All the same, as a community interest group, KUWG is keen to make connections with local key-decision-makers and aspiring local key-decision-makers, and the KUWG blogger notes here that whereas the pencilled-in date for these job-centre closures is February 2018, London council elections follow a few months later, and this Tory government intends to end central government funding support for local authorities by about 2020.