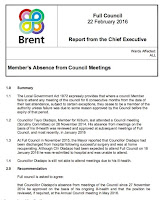 I have had a number of messages and phone calls regarding Council communications about the death of Cllr Tayo Oladapo (Kilburn ward). The central concern is that Full Council voted to approve his continued absence from ill-health when he had been dead for several weeks.

His death was not announced by Brent Council until March 11th, more than 5 weeks later. LINK

This is what I wrote to Carolyn Downs, Brent CEO:


I have been contacted by a number of people who expressed concern that the true picture regarding the death of Cllr Oladapo has not been given by Brent Council.

1, Cllr Oladapo actually died in January 2016 (January 29th has been given as the date).
2. That almost a month later Full Council on 22nd February agreed to approve his continued absence from meetings on the grounds of ill health.
3. That his death was not publicly announced  by the Council until March 11th
4. That his body is still in a morgue.

2 and 3 are a matter of public record.

Could you confirm the facts and explain the misinformation of February 22nd and the delay in the death announcement. In particular what checks had been carried out by officers/Brent Council with the hospital or Cllr Oladapo's family before seeking approval for continued absence on 22nd February?

I recognise that there may be family reasons for 4.

This is Ms Down's response:

In response to the point you have raised:

1. I have not received any formal documentation to confirm the death of Cllr Oladapo but understand that he died in late January.

3.  I can confirm that Cllr Oladapo's death was announced by the council on 11th March which was as soon as I had been able to obtain certainty as to Councillor Oladapo's state of health.

4. The arrangements in relation to Cllr Oladapo's remains are a matter for his family as you suggest and I don't think it would be appropriate for me to comment on this.

Although Carolyn Downs does not fully answer my question about checks carried out by Council officers ahead of the motion to approve continued absence, another source advises that Cllr Oladapo had reduced the number of visitors he received, not unusual in the seriously ill, and that the Royal Free Hospital had cited patient confidentiality when information was sought from outside the family.

This email was sent to councillors. It raises a great many questions, not least why Butt hadn't championed the family's cause.

Just wanted to give you a quick update about what’s happening with Tayo and his family.

His family has applied for their Visas to come to the UK, but sadly the application has been refused and they are looking to appeal the decision.

They will be sending me the details of the refusal and I will be in touch with Dawns office to see how we can help them to get their Visa.

I will do whatever I can do to assist; we may as a group need to consider how to make the arrangements for the funeral if the family wishes us to do so, which is highly likely considering the circumstances.

We also need to consider placing a memory vine leaf in the Civic centre gardens for Tayo after his funeral. We can also place a memory leaf for Dan Filson after the plaque has been unveiled next week.