The view from Park Lane Wembley. Chesterfield House is the building on the left. The highest of the Twin Towers will be 2-1/2 times the height of the flats on the right.

Only three members of the public turned up when Brent Planning Committee visited the site of the proposed 'Twin Towers' replacement for Chesterfield House on Saturday morning.

In summary concerns were:
During the presentation by the developer, The Hub, we were told that they were in talks to buy the woodland site at the back of Chesterfield House beside the Chiltern Line. This was likely to be developed as more flats but the Hub confirmed that this would be a separate application and that the Twin Towers plan was not dependent on the new purchase.

The unregulated land at the back of Chesterfield House, presently garages, would be used for disabled parking bays for the flats. Woodland is to the left. 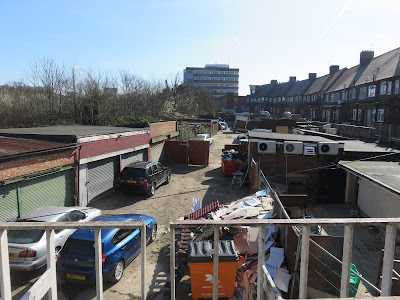 I understand that Cllr Sam Stopp (Wembley Central) will speak on the planning application at Wednesday's Planning Committee Meeting.This will be the first meeting of the Planning Committee since Steven Weeks, Head of Area Planning, left the Council.
Posted by Martin Francis at 10:06:00