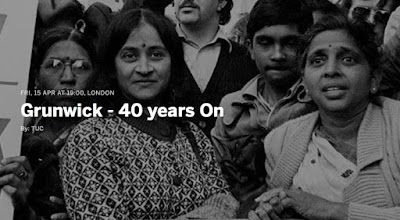 The TUC Race Relations Committee in association with the SERTUC Film Club presents a screening of ‘The Great Grunwick Strike 1976-1978: A History’, followed by a panel discussion on the lessons that can be learnt from the dispute.


This documentary film takes a look at the Grunwick dispute which erupted at a photo processing plant in Willesden, London, in the summer of 1976 and lasted two years. A predominately East African and South Asian female workforce went on strike over appalling working conditions and the issue of trade union recognition.  The dispute is remembered as one of the most significant in the history of the British labour movement.

The following panel debate will be chaired by Kamaljeet Jandu and participants will include Chris Thomson (Filmmaker), Dr Sundari Anitha (Striking Women) and Sujata Aurora (Grunwick 40).

The Grunwick 40 campaign is raising funds to install a huge mural close to the factory site in Willesden as a permanent public reminder of the unity that the Grunwick strike represented.
Support their appeal by donating or asking your union branch to donate via www.crowdfunder.co.uk/grunwick40, or via www.paypal.me/grunwick40, or send a cheque payable to Brent Trades Council c/o 375 High Road, London NW10 2JR.

40 years ago a group of Asian women asked for the right to join a union and were sacked by their employer. Their bosses thought that Asian women were passive and obedient and wouldn't fight back.
But that group of workers gained the support of thousands and went on to wage one of the longest and most important disputes in post-war British history.


They changed the idea that trade unions were only for white men. They shattered stereotypes. And at a time of enormous racial prejudice they brought people together in unity and solidarity.
40 years on we want to celebrate them.

We have ambitious plans to install a big mural close to the original factory site in Willesden, as well as stage an historical exhibition and a conference. But we need money to make it happen.
Please give whatever you can afford.

We have some exclusive rewards for people who donate including badges, posters, DVDs and rare artwork from the 1970s so please consider making a personal donation or asking your union branch to make one. Every £ helps to ensure that the legacy of the brave Grunwick strikers is not lost.

Visit www.crowdfunder.co.uk/grunwick40 to donate.
Posted by Martin Francis at 10:45:00

In 1976, like the Grunwick 40 I was a member of APEX trade union but in Birmingham, and so I remember having heard about the Grunwick 40. As a laboratory assistant, I was actually with APEX ['Association of Professional, Executive & Clerical Services', as I recall] Specialists; and maybe the Grunwick 40 were too?

Also as I recall, APEX got subsumed into UNISON trade union along with NALGO [National Association of Local Government Officers]. So the question might be asked, what is UNISON doing in remembrance of the Grunwick 40?