Since the battle over the building of the Ark Academy on playing fields in Wembley Park. which united Brent Teachers Association, Barry Gardiner MP and Bob Blackman, then leader of the Tory Group on Brent Council, there have been several other conflicts between schools and residents, including the long running saga over the expansion of Preston Manor LINK

The Kilburn Times LINK  has revealed that the Secretary of State for Communities and Local Government, George Clark MP, is to consider intervention in the case of the expansion of Byron Court Primary School following the referral by Brent North MP, Barry Gardiner.

In many of the cases there have been complaints about the lack of consultation with residents in the neighbourhood of the school and in at least one case the Council has been forced to send out additional letters.

This appears to be the case with the latest proposal for Kingsbury High School where it appears NO letters have been sent out to neighbours and the consultation list is mainly internal to Brent Council and leaves out external bodies such as Historic England: 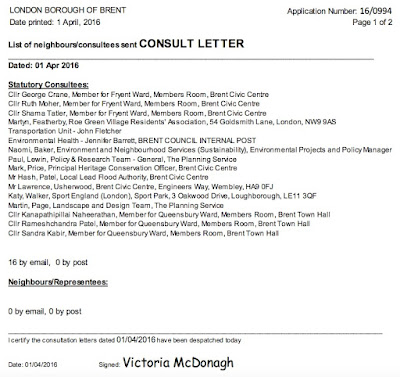 This proposal is for a commercial multi-sports facility in the grounds of Kingsbury High school comprising:
The facility will be run by Lucozade Powerleague (for some reason on its website notice about the proposal Kingsbury High left off the 'Lucozade'). It is a business rather than a charity LINK  and of course has all the usual contradictions of companies selling unhealthy products promoting sports. Lucuzade has the equivalent of 12-1/2 spoonfuls of sugar in a small bottle LINK 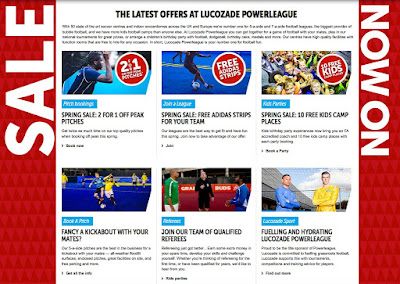 The present grassland playing fields would be hard surface or  astroturf if the proposals go ahead. This is a view of the fields from the back garden of a house in Goldsmiths Lane, Roe Green Village: 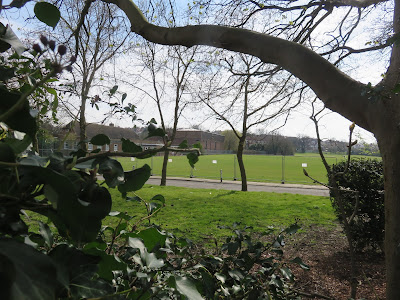 The planned development of the playing fields in the context of the locality of Roe Green Village and neighbouring areas: 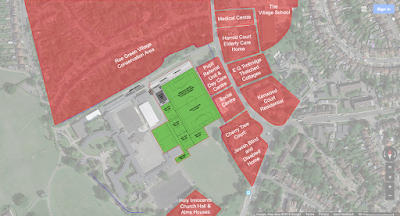 In exchange for making the facilities available to the school during school hours and a contribution to the refurbishment of existing sports hall and grassed area, Lucozade Powerleague get to rent out the facility with some concessions to community groups.  Readers can gauge the extent of this for themselves: 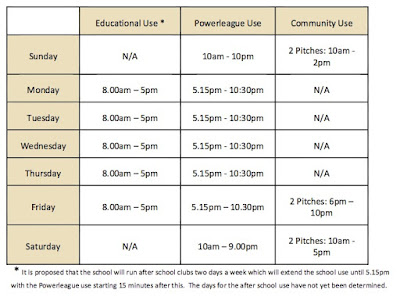 Kingsbury High and Lucuzade claim that the premises will not be licensed to sell alcohol but independent research shows that only 3 of 48 facilities do not serve alcohol and there appears to be nothing to stop them applying for licensing at a later date - especially if they can argue an economic case regarding the viability of the scheme.

Ark, Preston Manor, Byron Court and now Kingsbury High have all pitched what is seen as the interests of children (school places, additional facilities) against what is labelled (often behind closed doors) as the Nimbyism of local residents.  Increased traffic, noise, light pollution and the loss of open space is cited by residents.

This is pronounced at Kingsbury High where a unique conservation area, Roe Green Village, seems to be standing in the way of immense benefit to pupils at the school in an era of concern about young people's obesity (ignoring, for now,  the contribution of Lucuzade to that obesity).

Roe Green Residents in fighting an earlier application by a commercial company (see video below), offered to work with the school to improve the sports facilties through a fundraising drive, but this offer was not taken up.  The current headteacher of Kingsbury High, Mr Waxman, has reduced his working week and will be retiring in 2017, so this project, if it goes ahead, will be overseen by his successor.

Roe Green Residents have leafleted parents about their reservations on the scheme saying that they felt parents deserved full information about what appeared at first to be a great opportunity for the children. Local councillors' silence on this issue is said to be deafening but Barry Gardiner MP, has been responsive.

In fact of course, although Kingsbury High's academy status means that Council has no direct intervention rights, there is no reason why local ward councillors should not organise some meetings to bring the school, parents and residents together.

The proposal is yet another sign of the growing commercialisation and potential privatisation of schools through the academy programme.  The school will be paid an annual fee by Lucozade Powerleague in addition to the daily provision of sports facilities.

Residents will be taking on Lucozade Powerleague's  powerful public relations company GKA LINK which I am told has been actively lobbying councillors.

The ultimate decision on the planning application will be taken by the statutorily independent Planning Committee which should not be influenced by the council leadership.

Full details of the planning application can be found HERE

The video below was filmed some 25m from the Lucozade Powerleague facility at Mill Hill and gives some indication of the light and sound to be expected at Roe Green.

Strategic planning at its best -

a spoonful of sugar helps the medicine go down