I was one of 10 Chairs of Governing Bodies in Brent to send a letter to Brent Council leader Muhammed Butt and Lead Member for Children and Families Ruth Moher (copied to our three MPs) opposing the government's new policy of forcing local authority primary schools to become academies.

As well as oppositon from Labour, Greens and Lib Dems, lead members for education in the Tory Shires, the local Government Association and the Conservative Bow Group have also made public statements of opposition.

Dawn Butler, Labour MP for Brent Central has sent me copies of letters she has written to Muhammed Butt amd Carolyn Downs, Brent's Chief Executive Officer calling for the Council to lead a fight to bring schools back under local authoriy control. (I would prefer 'oversight' rather than control as governing bodies are responsible for the strategic leadership of schools).

Brent Council failed to support parents and teachers challenging the forced academisation of Gradstone Park Primary School and Copland High School. In the latter case Muhammed Butt supported the forced academisation claiming that the Council did not have the resources to support the school. He now sits on the governing body of the school which was renamed Ark Elvin when Ark took it over. 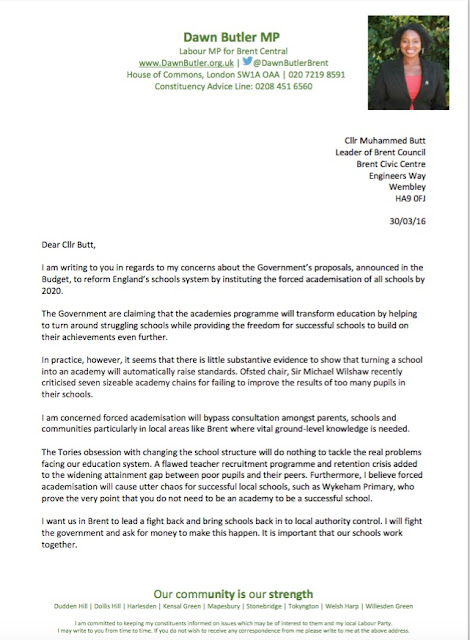