Readers with long memories will recall that the views of the new 'iconic' Wembley Stadium were to be protected but the Stadium is fast being hidden in a cluster of tall buildings.

This latest application going to Planning Committee on May 9th  is at the corner of Fulton Road and Albion Way, replacing Apex House and Albion House.

As with the 'Twin Towers' planners suggest that 'good design' makes up for the height the new Apex House, at 28 storeys two storeys higher than the tallest of the Twin Towers.

The lack of daylight is excused on the basis that their stay will be only temporary and 'consequently the impact of the proposal on the occupants of the building is considered to be acceptable. 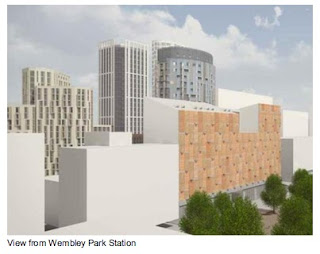 This illustration of the development looking along Olympic Way tucks the new building  away behind the current 'cluster'.