Larry Sanders: junior doctors are heroes in the fight for a high quality NHS 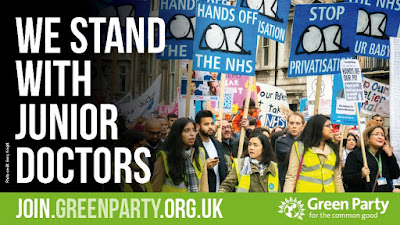 Commenting on the  junior doctors' strike, Natalie Bennett, Leader of the Green Party of England and Wales, said:


It is sad that junior doctors have been forced to this point by the obstinate approach of the health secretary, whose flat-out refusal to drop his insistence on imposing a new contract has scuppered any possibility of meaningful talks with the British Medical Association.

Industrial action is a last resort and I know from having spent time on the picket lines over recent months that junior doctors are taking this unprecedented action with a heavy heart.

Until then, I, and fellow Green Party members and supporters will continue to stand in solidarity with NHS staff as we fight for what’s right.

Larry Sanders, the Green Party's Health and Social Care Spokesperson and the brother of US presidential hopeful Bernie Sanders, added:


The Green Party supports the junior doctors’ strike because the new contract, if imposed, would have disastrous effects on patients and the NHS.

We are pleased that medical risks will be minimised by the back-up of senior doctors.

The junior doctors are heroes in the fight for a high quality NHS. They do not want to strike; their pride is in their work.

Jeremy Hunt is attempting to force a contract on them which puts patients at risk and reduces their pay. If he succeeds he will drive devoted doctors from the NHS. We already have too few doctors, nurses and hospital beds, with £22 billion of further cuts in the pipe line. A victory for Hunt would be an important step towards a profit-based NHS.