Brent Council on asbestos - We have been 'measured, proportionate and at no time irresponsible' 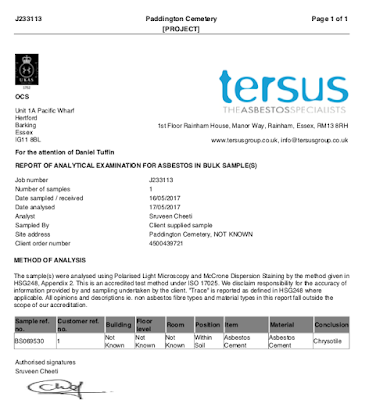 I attach the initial test note from May 2017 that first confirmed the presence of asbestos. This test was commissioned by Veolia and you will note the detail is very limited.

This led to the further investigations that are available on the council’s website. First the Eton report, and then the Delta Simons specialist survey and risk assessment.

On the other matters raised in your email, I refer you again to the very many previous responses, not least with respect to the independence of the audit investigation, the work to remove some soil from the site, the overall level of risk, the circumstances around the hazardous waste that was removed from Carpender’s Park and your allegation that contaminated soil was somehow knowingly and illegally moved to Paddington.

There are a number of further inaccuracies in your email, not least your suggestion that hundreds of pieces of asbestos have been discovered. I refer you again to the report –

It is important to highlight that there have now been at 34 exploratory holes advanced within the Site / materials, this is considered to be a very high density of investigation and it is highlighted that none of the investigations have identified any evidence of gross asbestos (e.g. large pieces of asbestos cement or asbestos lagging). Rather, the investigations have highlighted the asbestos contamination to be limited and diffuse with Eton reporting concentrations as being ‘Trace’ and the quantification testing by Delta-Simons not finding asbestos above the <0 .001="" limit.="" quantification="" span="">

I really must reiterate the need for responsible reporting of this matter. We have received a query today from a local resident asking whether her tap water is fit to drink. That is extremely regrettable.

The specialist’s report is clear –

It is recommended that the council gives careful consideration as to how the issue is communicated to the various stakeholders due to the perceptions and misunderstanding of the risks associated with asbestos, particularly within soil. Asbestos is a common contaminant in soils in the urban environment and the identification of it at this Site is not unique as it is frequently found in imported soil materials.

The council’s position is known and has been made clear many times. Our communications and reporting have been measured, proportionate and at no time irresponsible.
Posted by Martin Francis at 12:57:00