Last summer on July 24th a decision was made by the Brent Council Cabinet to spend ﻿﻿£17.8m of the Community Infrastructure Levy (CIL) monies on 'Strategic Infrastructure improvements' on Wembley Stadium and Olympic Way. Although I reported this on Wembley Matters at the time LINK under the headline 'Is £17.8m spend on Wembley Stadium public realm a good use of CIL cash?' the decision caused little discussion at the time. It was Item 24 on the Cabinet agenda and it was the beginning of the summer holiday.

Now Paul Lorber, former leader of Brent Liberals on the council, and others are querying the expenditure.  It is worth recalling the original Quintain statement about one part of the expenditure, the replacement of the stadium entrance ramps with steps: 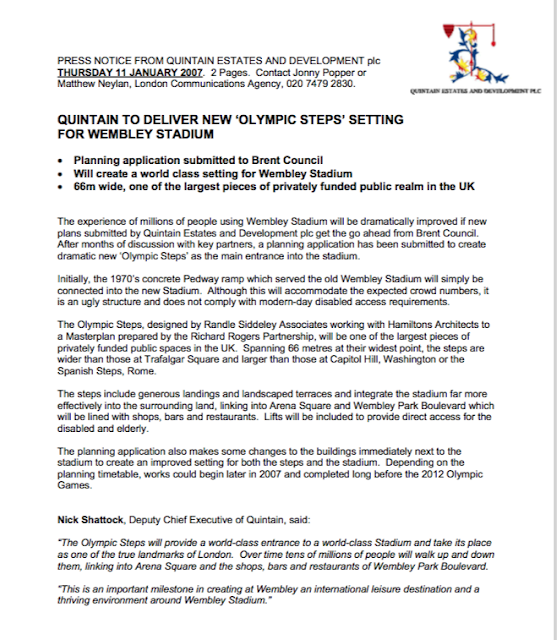 No mention in 2007  that Brent Council would end up paying for the 'world-class entrance to the world-class Stadium.'

The Minutes of the Cabinet meeting of July 24th records Shama Tatler's justification for in effective giving back to Quintain and the Football Association (owners of Wembley Stadium) a significant amount of the CIL raised Quintain's development.  Part of the motivation to handover the cash was to get an assurance that the area outside the Civic Centre (the library entrance side) would not be built up with yet another high rise development. Brent Council had previously given outline planning permission for the site.


Councillor Shama Tatler, Cabinet Member for Regeneration, Growth, Employment and Skills, introduced the item and spoke about the regeneration of Wembley and the need to support the ongoing transformation of the area into a thriving, attractive environment. Councillor Tatler informed Cabinet there was scope to use some of the strategic Community Infrastructure Levy (CIL) funds which had been raised as a consequence of development in the area, to invest in the public realm along Olympic Way. She said that enhancing the public realm was a key element in a step change of the positive experience the Council was aiming to achieve for residents and visitors, including an environment which would encourage people to dwell both before and after events. In addition, the arrangement would also ensure that the space outside the Civic Centre, currently subject to a planning permission which could be implemented, was used to contribute to the proposed educational quarter and provide more of a public square. Councillor Tatler said that this would be a joint project with Quintain and the Stadium and referred to a letter from Quintain (see Appendix 1 to the report on page 605 to the Agenda pack). She added that the report sought the approval for funds up to £17.8 million to accelerate the delivery of the public realm in two zones – B and C, with public realm works Zone A being entirely funded by Quintain (see page 594-602 to the Agenda pack).

Councillor Miller commented that the proposal was focused on a concentrated area, but it would have significant national impact. In relation to the rest of the Community Infrastructure Levy contribution, Councillor Tatler confirmed that options to spend it across the Borough would be considered.

Zone A is Olympic Way, Zone B the area around the ramp from Olympic Way up to Bridge Road and Zone C the stadium ramp.

Brent Council made the following responses to Paul Lorber's request for further information on the plans:

“By copy perhaps the Chief Executive can explain why at a time when basic services to local residents are being starved of money the Council could possibly agree to hand over £17 million of CIL money to one entity - Quintain - a company owned mainly by an equity fund based in Bermuda. Were the Cabinet Members aware that they were handing public money to a company owned from a Tax Haven?”

The decision was made by Cabinet, to support the regeneration of Wembley Park and the role that the Stadium has not only in that, but as a piece of national infrastructure. The Cabinet report is available here (see item 24).

The decision builds upon the existing partnership between the council, Quintain and the FA to enhance Wembley Park, and must be considered not only in terms of the economic benefit which the regeneration brings to Wembley and the wider borough, but also in terms of the international reputation and national benefit associated with the location of the Stadium – which necessitates appropriate investment to create a world class public realm to go alongside it.

The location of the ownership of Quintain was not relevant to decision, which was focussed on public realm improvements and the enhancement of Wembley Park. Cabinet resolved that the contribution is contingent on Quintain fulfilling a number of requirements for the public benefit:

a)       Not pursuing development of site NW04 adjacent to the Civic Centre to the extent currently permitted in the parameters plans associated with outline planning permission 10/3032.

b)       Working with the Council to deliver a development that better complements the role and setting of the Civic Centre, in particular creating a significant new square outside the Civic Centre Library.

c)       Agreeing a business plan and heads of terms, between Quintain and the council, for the future sharing and reinvestment of net income generated through assets on Olympic Way.


I note that the CIL money will be used for “strategic infrastructure projects” and the Council is considering which ones. How did it come about that £17.8 million was allocated to one project before the process of considering which projects to fund have been listed or even consulted on?

As you know Councillors (including members of the Cabinet) receive hospitality from both Quintain and the FA and it seems odd that a decision on one project was made in such a rush without being assessed against a list of others.

It also seems very odd that part of this substantial sum seem to be a ‘bribe’ to persuade Quintain not to build a large building next to the Civic Centre - why would this be such an important priority for millions of public funds?

As you know many residents around Wembley and Alperton are very concerned at the height of some buildings given planning permission. In view of the approach in respect of the site next to the Civic Centre why would it not be appropriate for residents of Alperton to ask that the developer of the site on the corner of Ealing Road/Bridgewater Road to be paid a chunk of CIL money to persuade them to reduce their tower from the 26 Storeys to say a more reasonable 12?

I hope that the priority for the £17.8 million decision has nothing to do with the fact that the Stadium is in the ward of the Leader of the Council.

In any case the report clearly does not identify other priorities in Brent in need of substantial funding. The Budget report for example identifies £300,000 shortfall of funding from the Mayor of London and of course CIL money could be allocated to Bridge this gap.

My biggest issue is of course public money being handed over to a private company which is owned by Investors who are based in Bermuda for obvious tax reasons - when there is such a desperate need for cash to deal with the massive backlog of work to Brent’s crumbling roads and pavements.

If the Council had consulted properly local residents would have made their views very clear. Every time they ask for anything to be done in their street - pavements, roads or verges - the answer is always the same “there is no money”.

That answer is of course not true as a staggering £17.8 million is being spent on something that most people in Brent do not regard as a priority.

in my view a wrong decision was made and Councillors were not given the right advice or proper options before making their decision. Sometimes officers advising should put themselves in the shoes of local residents - this might help determine local spending priorities.