'Go and play on the roof my dear, but please don't breathe' - new primary school for Wembley 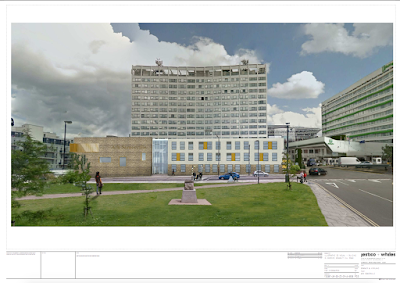 You do wonder sometimes...

The school, which when full would have 630 children plus nursery, is the Ark Somerville and would be funded directly by the government with no oversight from Brent Council. It would have rooftop play space.

It is close to Elsley Primary School which has recently doubled in size from two forms of entry (240 children) to four forms (840), round the corner is Ark Elvin Academy and along the road at Wembley Park the all through Ark Academy (3-19 years), Michaela Academy and the Lycee.

That's an awful lot of child journeys by bus and car. It will of course be argued that children will walk from the new build Quintain developments but these are not exactly family-friendly developments. Theye are likely to come from further away.

Just imagine parents dropping children off on this busy road!

Elsley Primary has not filled up and there is a danger that Ark Somerville could cream off pupils from Elsley and other nearby primary schools.  After years of rising school rolls some Brent primaries are now experiencing reduced waiting lists and even falling pupil numbers in the wake of Brexit and movement of housing capped families out of London.

The application is HERE. A date has not yet been fixed for it to go to Planning Committee

Well if I were a caring parent of a child of primary school age there is no way that I would send my child to a school on this site. This plan should be refused on the grounds of air quality alone let alone all the other reasons.
It is sheer madness.

Unable to fathom how this even got to the planning stage. What parent of sound mind would send their child to a school located on a busy main road which for the most part is heavily congested throughout the day. Has anyone even tested the Air Quality? I would also be interested in how many family homes there are on Quintain Development as most of the ones I have seen advertised are 1 and 2 bedroom flats which are not either affordable or practical for families of 1 child.

We have a Dictatorship here in Brent and the Labour Councillors in charge feel they can make any decisions they like and get away with it. The tragedy is of course the fact that it is the future generations who will have to sort out this mess. Labour should have demanded that Quintain hand over a piece of land for a school well away from the most congested and polluted road in Wembley. Instead they have been bought off with this daft proposal.