Stump up for the Sheffield Tree defenders

The perils of PFIs of local authority services, out-sourcing and the pitfalls of poor contracting have been illustrated to devastating effect by the battle going on in Sheffield over the Amey contract for tree 'maintenance' which has seen healthy trees being felled and the transformation of a once leafy streetscape into arid avenues.

Local residents and activists, including from the Green Party, have been desperately trying to save the trees via peaceful protest and have met with rough treatment from the contractors and their security as well as being pursued by bailiffs acting on behalf of the Labour Council.

Several local Labour Parties in  the area have come out against along with Sheffield Momentum. This is the resolution passed by Gleadless Valley Labour Party:


Gleadless Valley Labour Party branch opposes the consequences of the PFI deal for street improvements in Sheffield which has led to both the widespread removal of trees and the failure to meet timescales for road improvements. If this work had been delivered in house by a council service, it is inconceivable that the opposition to tree felling would not have led to changes. As it is, the actions of Amey plc have both failed the council’s road improvement ambitions and undermined the reputation of Sheffield’s environmental credentials. We reaffirm our support for our G.E. Manifesto’s opposition to PFI deals and call on our sisters and brothers in the Labour Group to support an immediate, mediated settlement to the felling of our street trees. 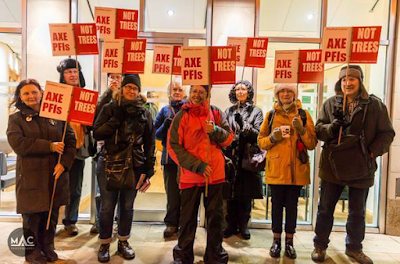 A Crowdfunder Appeal has been set up to help pay the legal costs imposed by the heavy-handed Sheffield City Council (SCC). You can donate HERE.

The Crowdfunder page sets out the issue:


Calvin Payne and Alastair Wright committed no crime, but in defence of our street trees, they both fell foul of a court injunction pushed through by SCC to force its felling programme on its own citizens. Not satisfied with their punishments for contempt of court, the Council is seeking inflated costs from Alastair and Calvin of £11,000 and £16,000 in costs respectively.

We want to raise £27,000 to pay Alastair and Calvin's legal costs with your help, and the support of Pulp's Nick Banks and Richard Hawley, actor Maxine Peake, and Caroline Lucas, co-leader of the Green Party, George Monbiot, author and environmentalist, along with Ken Loach, activist and film maker, and many others,  all offering support and endorsing this Crowdfunder.

We will not stand by and watch legitimate peaceful protest and civil disobedience being extinguished by an anti-democratic SCC with its taste for expensive legal action. For every injunction hearing brought before the judge, SCC is deliberately paying £16,000 a day for London based legal representation so as to intimidate protestors by emptying their wallets and savings accounts.

Tree campaigners in Sheffield, like Calvin and Alastair, are simply asking that the council complies with current urban forestry good practice. A perfectly reasonable request. The council has responded with threats, force, and an army of private security guards to intimidate the many protestors that now attend felling sites on a daily basis. It has ignored experts on all sides, and even ignored the findings of its own 'Independent Tree Panel'.

In this long-running and increasingly bitter dispute, SCC and its principal contractor, Amey plc, have resorted to increasingly desperate measures and unsafe working practices to fell healthy street trees. Their relationship is underpinned by a confidential Private Finance Initiative (PFI) deal, a form of financing which is widely discredited; it has led to the privatisation of Sheffield streets and street trees.

The Council has mounted dawn raids, has tried (and failed at great cost) to have a serving Green councillor imprisoned, has smeared and slandered campaigners in the media, while its representatives have repeatedly lied to the people of Sheffield.