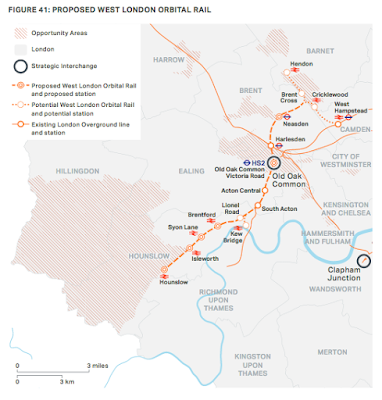 Years of campaiging, publicity and network building by local activist John Cox appears to have persuaded the Mayor of London, TfL, Network Rail and the London Alliance of Boroughs to consider a new Overground line linking Hounslow with Brent Cross, Hendon, Cricklewood and West Hampstead via Old Oak, Harlesden and Neasden.

The West London Orbital has now been incorporated into the revised Mayor''s Transport Strategy.

Transportation is used as a tool for gentrification under the guise of “regeneration” - this must be opposed. Proof, again, that all transport needs to come under democratic control

All the “opportunity” areas are places with social housing - funny that.

None at Wembley.
None at Old Oak Common.
Only at Brent Cross.