Quintain's planning application for the replacement of the Wembley Stadium Pedway by steps is now on Brent Council's Planning Portal  LINK. The application will be heard by Brent Council Planning Committee. Brent Council has controversially given £18,000,000 Community Infrastructure Levy monies back to Quintain for this and other claimed improvements to the public realm between Wembley Park station and the stadium. 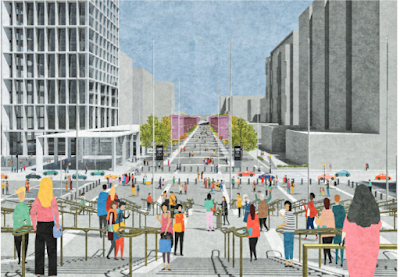 The steps are very similar to those at the station with the addition of a broader landing at the top of the steps.

The full application contains proposals for the possible  use of the 'undercroft' beneath the steps similar to that on the South Bank which was only saved for skateboarders after a spirited campaign. 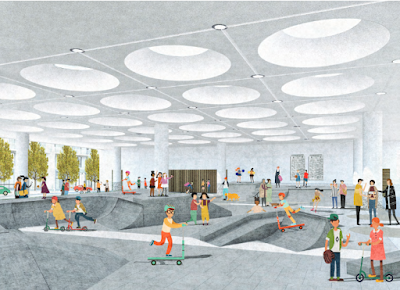 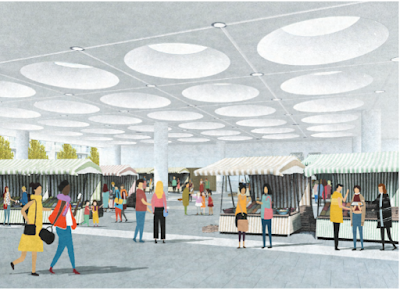 The plan involves the planting of trees along Olympic Way and the construction of two roads parallel to the steps connecting the stadium to Engineers Way.

Summary of the Planning Application:

18/0973 | Full planning permission for the demolition of the existing 'Pedway' ramp structure to the front of Wembley Stadium and the construction of a set of steps (with associated lighting) to connect ground level to Wembley Stadium Landing Level (concourse); and use of the void created beneath the proposed steps as secure storage for estate maintenance equipment; the reconfiguration of an existing unadopted estate road (Perimeter Way) to create two new roads either side of the steps connecting to Engineers Way; the use of land beneath the steps bridge as temporary event space; a revised vehicular access to Plot W03 immediately west of the application site and public realm works comprising the installation of hard landscaping, street trees, lighting columns that can incorporate advertising banners, street furniture, underground water attenuation measures, services, tree pits and other associated works. AND Advertisement consent is sought for banners to four lighting columns on Olympic Way, as proposed under this application. | Zone C, Olympic Way & Perimeter Way, Wembley, HA9

Putting aside the issue of all the alternative uses that Brent could have made of the £18 million the issue of safety arises when the stadium empties down the steps. The station steps are steep but are not used in one massive exit from the station but staggered as trains arrive at intervals. People wlll exit the stadium at the same time and descend the steps. We already know how rammed it gets on the pedway and Olympic Way at exit times - one slip and there could be a serious accident.  The illustration on the application gives a clue to how crowded it will get: 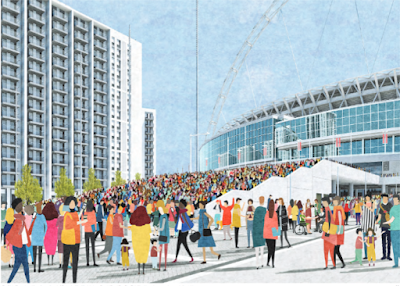 This proposal will surely be approved by Brent, as both the Council's Strategic Director, Regeneration and Environment (Amar Dave), in his report to Cabinet, and the Lead Member for Regeneration, Cllr. Shama Tatler, at the Cabinet meeting on 24 July 2017, made a promise in these words:

'Enhancing the public realm [in Olympic Way] is a key element in a STEP CHANGE of the positive experience the Council is aiming to achieve for residents and visitors.'

Haha. I know people on South Kilburn and in Harlesden who think the whole thing is a joke.

How are people with disabilities or daleks going to manage these steps?
The ramp was fine.

You'll have to search the many planning documents for an answer but there is this bland statement: 'Proposed Development is Compliant with inclusive design requirements and will create a more inviting, inclusive and accessible environment for all users, regardless of any disability.' Elsewhere it refers in the special language of planners to 'significant vertical transportation assistance for the mobility impaired.' I think that means a lift.

Another reader Thanks) sent a different link now incorporated into article.

Quite aside from the fact that people who have disabilities will not be able to use the steps including those who have health issues and will struggle with physical fitness required to walk up them, surely there is a safety element of having large amounts of people trying to leave the stadium at the same time. People drop things, it rains, steps get slippery, accidents happen. £18m for an excuse to build storage space. Seriously?

The application and Brent Council also mention 'commercial opportunities' opened up both by the undercroft and space made available because the footprint of the steps is less than that of the pedway. Not sure how long it will take to earn the 18 million...

One thing that crosses my mind is what are the proposals for access to the stadium and for traffic using Engineers Way whilst all this work is going on. There is going to be an extensive time period lasting from the closure of the pediway prior to its demolition through the demolition work and then the construction and testing of the steps prior to commission. How are people going to get to the stadium from Wembley Park station? rocket back packs? a very long scaffolding with scaffold planks?
What is going to happen to the traffic going along Engineers Way.
Are events at Wembley Arena going to be cancelled during this time as there is going to be a substantial work site virtually alongside it which could provide some danger to fans which gather in the square.
The whole project seems to be madness.

Brent's CIL contribution is dependent on the reconfiguration of plot NW04, the details of which can be seen in Application 18/0968: https://pa.brent.gov.uk/online-applications/applicationDetails.do?activeTab=documents&keyVal=DCAPR_138991

It is definitely an improvement over what is there now. As for accessibility, just because there are ramps currently it doesn't make them suitable for accessible use. The current gradient is quite steep, which may be why they claim it does not meet current accessibility regulations.