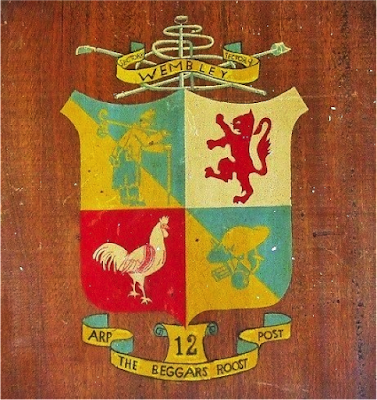 
Thirteen months ago I posed the question ‘Where was “The Beggars Roost”?’ in a local history guest blog LINK. I was writing about a photograph I had been sent by a lady in Nashville, Tennessee, of a hand-painted coat of arms she had bought in a charity shop there. It appeared to have been created for Wembley’s A.R.P. (Air Raid Precaution) Warden Post 12 during the Second World War.

I still don’t know exactly where Post 12 was located, or why it was named “The Beggars Roost”, but further research has suggested that it was probably somewhere in the Roe Green area of Kingsbury (though not in Roe Green Village itself, whose wardens had Post 11). However, last summer an amazing piece of generosity happened – Cheryl, who had bought the plaque for her own home, decided that its proper place was back in Wembley, so that people here could see and enjoy the coat of arms in its historical context.

Cheryl donated the plaque to Brent Museum, and it now forms the centrepiece of a small exhibition which has just opened at Kingsbury Library:

For the past few months I have been working with Alison, a Brent Museum volunteer, and Museum staff, to put this exhibition together. It includes objects and pictures from the Brent collections, and some loaned by fellow Wembley History Society members, and tells the story of Wembley’s A.R.P. Service (wardens, first aid and rescue teams) from 1938 to 1945.

It is a story of thousands of local men and women who gave their time, and in some cases their lives, to help protect their neighbours from German bombing raids.

This was a very difficult period in our history, and one that those of us born after 1945, including young people to whom it is just something that happened long ago, could benefit from understanding better. Residents whose families have come to our area in recent decades, sometimes from countries which themselves have suffered war, could also see that people here have had that experience too. One of the air raids that the A.R.P. Service had to deal with, and which is pictured in the exhibition, happened within sight of Kingsbury Library.

The exhibition will be on display every day, during library opening hours, until around the end of May 2018. I will be giving a “coffee morning” talk, linked with the exhibition, at Kingsbury Library (522-524 Kingsbury Road, London NW9) on Tuesday 24 April, 11am to 12noon.

I hope that you will take the opportunity to visit Kingsbury Library, to enjoy one or both events. This is the official Brent poster for them:
HERE