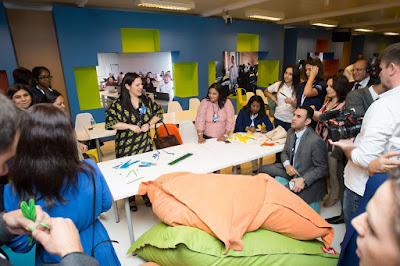 Andria Zafirak, a textiles teacher at Alperton Community School, has won the Global Teacher Prize. Andria's commitment to seeing her pupils lives in a holistic way, going beyond the school gates and recognising the role of creativity in education, are an imnpressive aspect of her practice. Congratulations Andria!

The BBC in reporting the award LINK said:

In her acceptance speech, she said schools should be "safe havens" and called for greater recognition for the value of arts subjects in school.

She warned of "deprivation" and "tough lives" where "children may not eat well because their lunch boxes are empty".

But she said school could make a great positive difference - particular through creative subjects.

"Too often we neglect this power of the arts to actually transform lives, particularly in the poorest communities."

The teacher from Alperton Community School has been praised for her work with the local community as well as with pupils.

She says the mix of people and languages in this part of north London is a "beautiful challenge" which creates a "buzzing" atmosphere.

Brent is claimed as one of the most ethnically diverse places in the UK, with 130 different languages spoken in the London borough.

She has learned basic phrases in languages such as Hindi, Tamil and Gujarati and has visited homes to build links with the school.

Mrs Zafirakou has been praised for making her pupils feel secure, working with the police to make sure they travel to and from school in safety.

And she will have to stay in teaching, because a condition of the prize is remaining as a teacher for at least the next five years.

When she reached the top 10 shortlist, she spoke of the disadvantages facing many of her pupils.

"By getting pupils to open up about their home lives, I discovered that many of my students come from crowded homes where multiple families share a single property," said Mrs Zafirakou.

"It's often so crowded and noisy I've had students tell me they have to do their homework in the bathroom, just to grab a few moments alone so they can concentrate."

In response, she organised extra lessons during the day and the weekend, including giving pupils a quiet place to work.

The nominations from Andria's school said:

"I am submitting a nomination for a teacher who is a true gem, one who inspires such possibility and potential in her students, their parents, the staff, her peers, the local community, and future teachers and leaders."

"A phenomenal teacher and leader. She is guided by a moral compass that underpins a passionate desire to give every student at her school the world - no ceilings, no limitations, no boundaries."

"She is a force to be reckoned with when it comes to ensuring that students deserve the best education possible."

"One lady with care and passion can make a huge difference to the lives of many. She is upbeat, full of character, highly regarded and I wish all schools were blessed with a senior leader such as her!"