One of the large schemes approved at Brent’s Planning Committee meeting in February 2021 was for a mixed-use redevelopment of the Abbey Manufacturing Estate and Edwards Yard, at Mount Pleasant in Alperton. I’ve since found out how Edwards Yard got its name. This is the story behind it, and the reason why that name should be retained in the new development. 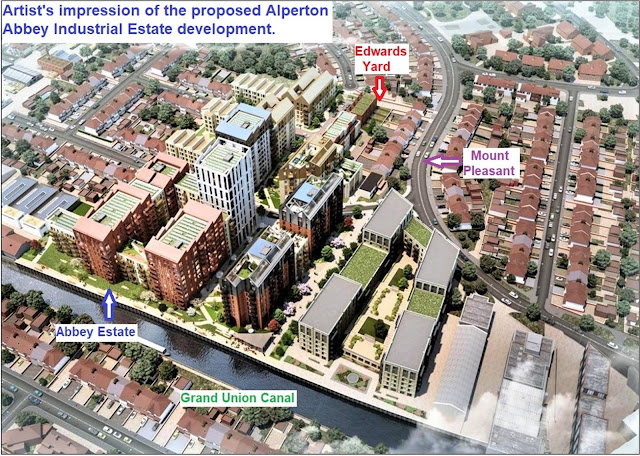 1.   Aerial impression of the Abbey Estate development. (From application 20/3156 drawings, with notes added)

My quest began when I was seeking information about another Alperton business, Cousland & Browne, to help answer a local history query I’d received. They had been timber merchants, beside the canal. One of the answers I received was from Diane, whose father used to deliver timber for them. She remembered, along with her mother, going in the lorry with him all the way to Saundersfoot in Wales, on one of those trips in the late 1950s.

The Paddington branch of the Grand Junction (now Grand Union) Canal opened in 1801. It cut its way through the village of Alperton, and helped bring lots of trade and small canal side industries to this mainly rural part of Middlesex. Bricks, gravel and hay were sent into London, while rubbish and other waste products were brought out to be processed. The boiling of food waste to feed the pigs at three farms, and the manufacture of oil and manure from fish refuse meant that Alperton had a smelly reputation in late Victorian times! 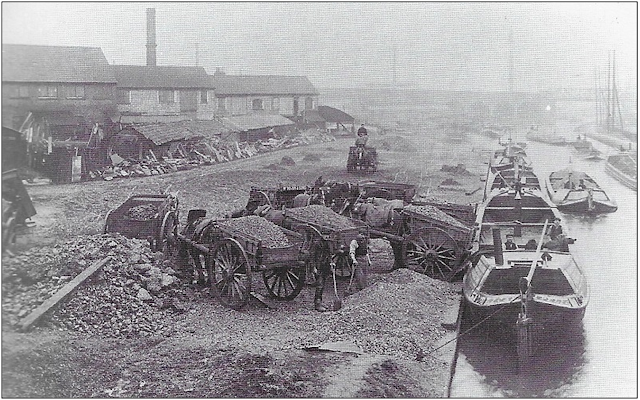 Diane’s grandfather, John William Edwards, was born in Wembley in 1869. By the early 1900s he was employed as the farm bailiff at Clyde Vale Farm. He lived in Alperton Cottage, at the eastern end of Honeypot Lane (later renamed Mount Pleasant), where the rear entrance to Lyon Park School is now. He and his wife had a number of children, including Diane’s father, David, who was born in the cottage in 1909.

By the early 1920s, John Edwards was trading as a haulage contractor. His sons Albert, Henry and David joined him in what became the family business of J. Edwards & Sons. At first it was horse-drawn carts, and as well as general haulage the jobs they took on included delivering materials to Wembley Park, for construction of the Empire Stadium and some of the British Empire Exhibition buildings. 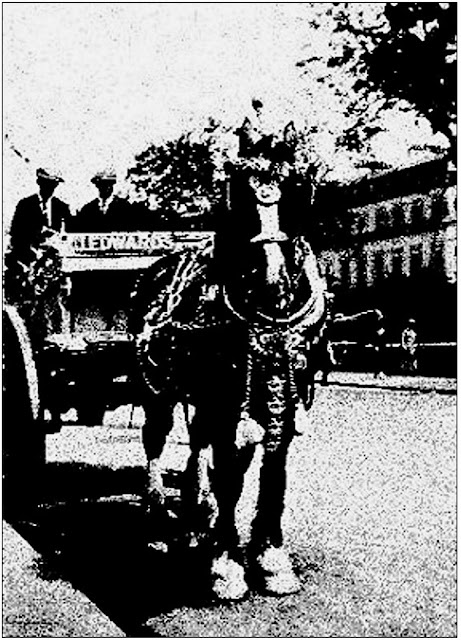 In 1923, the sports equipment manufacturers, Charles Webber & Co, had purchased a 5-acre site in Honeypot Lane, formerly the Alperton Park brickfields. The following year they sold a plot of land to John Edwards, as he needed a larger base for his business. The rest of the Webber’s land became the Abbey Trading Estate.

Edwards built a house, with stables for 11 horses in a yard behind it, in 1925. “Meadow View”, soon to be addressed as 122 Mount Pleasant, was beside a row of workers’ cottages built by Alperton’s Victorian entrepreneur, Henry Haynes. In 1931, John Edwards bought more land behind the cottages, creating the site which has been known as Edwards Yard ever since. 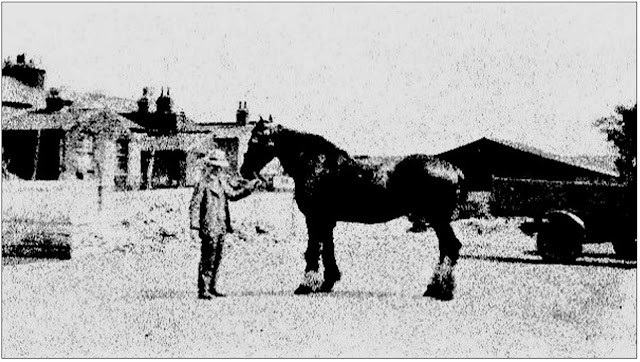 The extra land was used to build garages for the firm’s growing number of lorries. The family home, where John Edwards lived for the rest of his life, was also where the business was run from. A sign on the front of the house read: 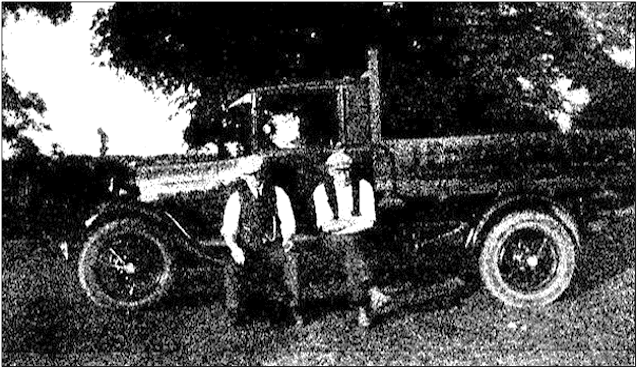 The rapid expansion of suburban estate building in Wembley and surrounding areas, from the mid-1920s onwards, meant that J Edwards & Sons were rarely short of work. John Edwards finally retired from the business in 1943, gifting it and the yard to his three sons. After the end of the war their lorries were busy, both with general haulage work and clearing of bomb-damaged sites.

Henry Edwards retired from the partnership in 1954. As not all of the yard was still needed, some of the garage buildings were rented to other small businesses. David was left running the business by himself once Albert retired in 1963. He kept on transporting goods and clearing rubbish from local factories, with several lorries and a couple of employed drivers, until he retired in 1967 and the haulage business ceased. After that, all of Edwards Yard was let out to small businesses, many of which operated from there for decades. 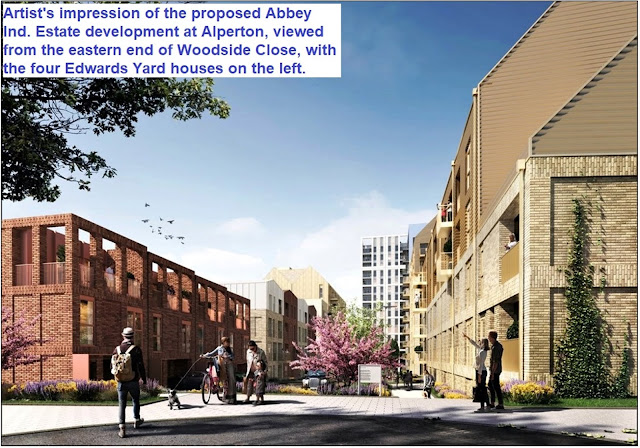 7.   An artist’s view of the Abbey Estate development, with the potential new Edwards Yard on the left.
(From planning application 20/3156 drawings)

The yard stayed in the ownership of the Edwards family until it was finally sold to Zedhomes Limited in 2019. Now Diane has asked the developer to retain the Edwards name as part of the new development. A block of four houses is planned to be built on the site of the old yard. Edwards Yard would be an ideal name for these, to remember a place that has been a part of Alperton’s heritage for nearly 100 years!

Philip Grant (with thanks to Diane for the information and Edwards family photos).

This comment was left on FB and I am including it here in case Philip may be able to respond. What an interesting slice of local history! I remember the Curley’s directory. Mr and Mrs Curley lived at 49,Woodfield Avenue North Wembley next to my in-laws. The directories listed all the addresses in the area and the names of the families living there. I think Mr Curley was on the council.

The Facebook commenter was right! As well as publishing his own Wembley street and trades directories from the 1950s until the early 1970s, Mr M.L. Curley was a member of Wembley Borough Council.

Councillor Curley was also one of the original members of Wembley History Society in 1952. One of the subjects he researched was the pioneering work on television of John Logie Baird and his team in Kingsbury. He was the Chairman of the History Society when a memorial stone to Baird was erected in Roe Green Park, in July 1953.

It was in the old coach house (known then as Kingsbury Manor Studio), that Baird received the first internationally transmitted TV pictures in 1929, and the first combined picture and sound transmissions in 1930. The memorial stone is now against the wall of the former coach house, now a childrens' nursery, near the playground in the park.

All parts of Wembley, and Brent, have many interesting slices of local history, not just Alperton or Kingsbury!

Brent Museum and Archives, at Willesden Green Library, reopened yesterday. Check out their website for details of opening hours, how to contact them if you want to search for information there, and news of their latest exhibitions.