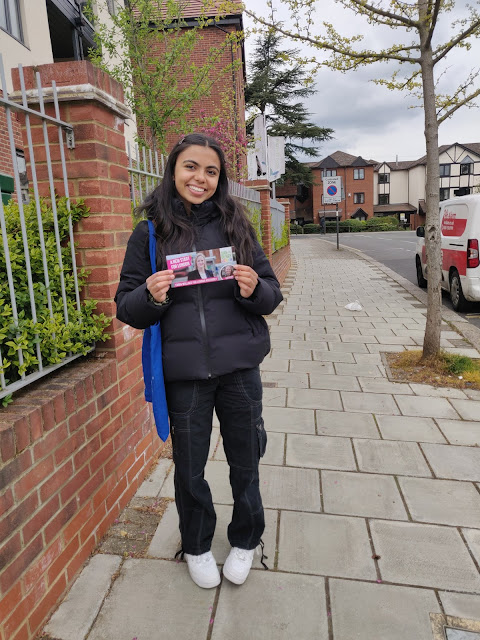 Aria on the campaign trail

This Thursday 6th May, Londoners have a chance to make their voices heard. The Mayoral and London Assembly elections, postponed due to the pandemic, are now happening and have lost none of their excitement and importance.

This isn't a national election but it's still vital to get out and vote. This is a way to choose the people who will represent us and shape the future of our neighbourhoods and city. The Mayor of London's scope of work is much broader than people realise: the role determines the state of our housing, how green and safe our environment is, the quality of our communities and how efficient our transport is. They may not be debating the future of the EU or negotiating with the UN, but they have the all-important job of improving the city we live in.

The Green Party has long been fighting for the UK to improve its environmental record and combat the Climate Crisis effectively. National level action is certainly needed, but change begins locally and this election is about making a concentrated difference in your borough and city. Due to the huge role the natural environment plays in our everyday lives, we have to vote for a Party who will protect it. We all enjoy the green spaces in our local area, and we suffer when we walk to school or work along busy, polluted roads. Not only do the Greens want to make positive environmental change, they want to involve citizens too, because they recognise how important our opinions are.

The Green Party's manifesto is not just about environmental issues, but also about better housing, transport and safer streets. In fact, these are all connected: we need to have greener homes with less energy loss to save money and conserve fuel and have more efficient transport systems to help commuters on roads and bridges that are not disruptive and environmentally damaging. These things are important for all cities, but particularly London. We need an Ultra Low Emissions Zone to protect our health from rising air pollution. Where so many people are struggling to find affordable housing, we need the Greens who are committed to prevent the loss of council housing and allow people to plan for new homes through a People's Land Commission.

In addition to voting for a Mayor, you will also vote for 2 London Assembly members, one who represents your constituency and another who is a London-wide Assembly Member. The first is on a YELLOW ballot paper and the second on an ORANGE ballot paper. For the constituency member, you select a named person but for the London-wide member, you just pick a party. Please consider voting for the Green Party.

The proportional representation system of this election is more representative than the "first-past-the-post" system of general elections, and gives smaller parties, like the Greens, a better chance of being elected, allowing London’s population to be more accurately represented.  So please use your vote to support smaller and committed candidates.

During the pandemic, we have all found a new spirit of community, an appreciation for nature and our local area and have realised how much pollution improved when commuting paused for a while. Difficult times lie ahead for many people so we need a supportive Mayor who can help Londoners find houses, jobs and support services.

We've realised how much power every person holds to make positive change and shape a better, greener future. This election now gives us the chance to vote for a party who wants a new start for London, who believes in the same things as us and wants to fight to protect them.

As young Londoners who can't yet vote, we need adults to make a responsible choice for our future. We want to grow up in a safe city, free from crime and pollution with affordable houses and jobs. London really is a special city, that's why you should vote Green to give it a fresh start and make it even better for future generations.

As one of the "older generation", it is encouraging to see a young woman with such a clear understanding of the situation in our capital city, and willing to share her views publicly.

I have already voted (by post). I hope that every reader of this article either has used their vote, or will vote on Thursday. Every vote counts!

And although you will have to wait a little while longer until you can vote, Aria, I'm sure you will use your votes wisely when the opportunity comes.