From ruin to restoration – What makes good planning?

Guest Post by Philip Grant in a personal capacity 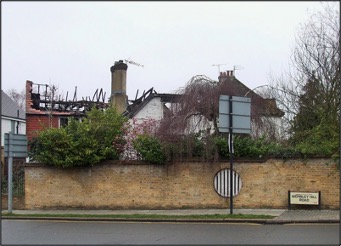 The ruined Wembley Park Lodge in 2017

For the past few years, the former Wembley Park Lodge at the corner of Wembley Hill Road and Wembley Park Drive has looked a sorry sight. Badly damaged in a fire in 2013, and with its roof missing, many wondered whether this historic cottage, dating from the 1790s or early 1800s, could ever be saved. 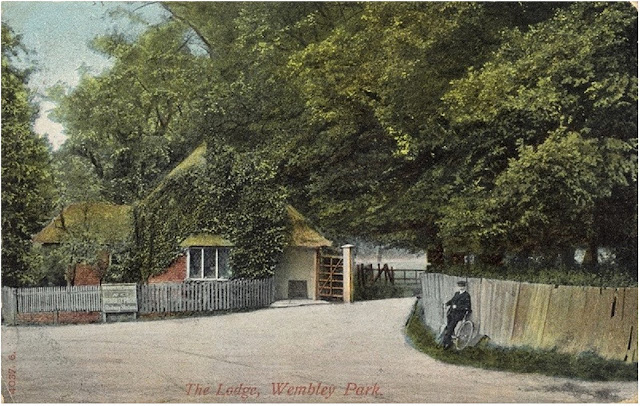 Last autumn, there was an application (20/3027) for permission to demolish the 1930s extension to this Grade II listed building. With my interest in Wembley’s history, I submitted a comment, to say that although I did not object to the remains of the more modern structure being demolished, great care should be taken to ensure that the original parts were properly preserved and safeguarded, for incorporation in any restoration of the cottage.

As a result of my earlier comment, I received a letter from Brent Council last week, advising of a new application (21/0703) for full planning permission at 114 Wembley Hill Road (the Lodge’s modern address). This proposes the restoration of the cottage, and the construction of a new house on the site, to help cover the cost of making good the heritage building. As the “footprint” of both homes will be relatively small, the plans include basements under a new extension to the Lodge and the new house, to provide laundry and media rooms, plus storage. 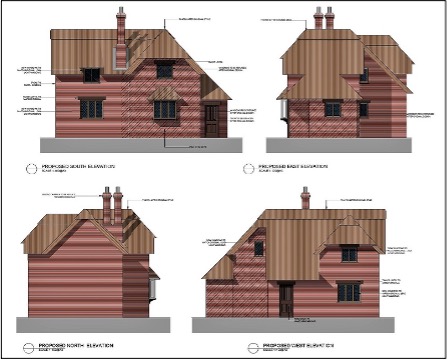 The proposals for the restoration of the Lodge have been closely discussed with the experts at Historic England (formerly “English Heritage”, who oversee listed buildings). While the 1930s extension had a tiled roof, these proposals include a thatched roof for the whole building. That may seem odd, but a look at the 120-year-old postcard above shows that the single-storey section of the cottage then, on the left of the picture, was also thatched. 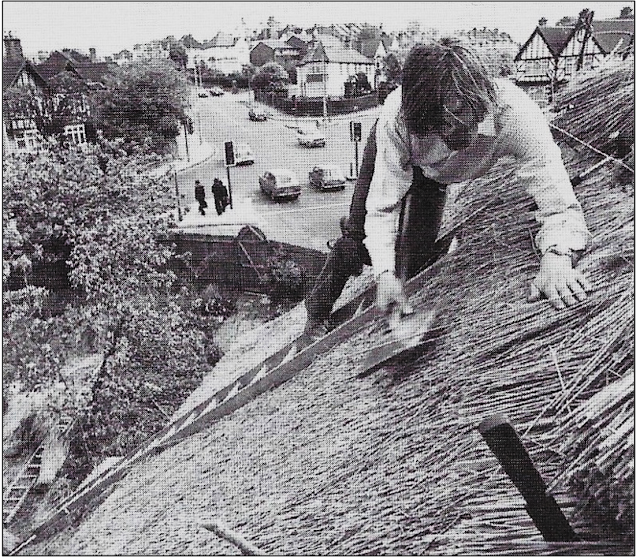 The Lodge is on a prominent corner site, in an area of mainly inter-war suburban housing. Corner sites play an important part in defining the character of an area (as I will mention later), so it was important to get the location and style of the new house right. 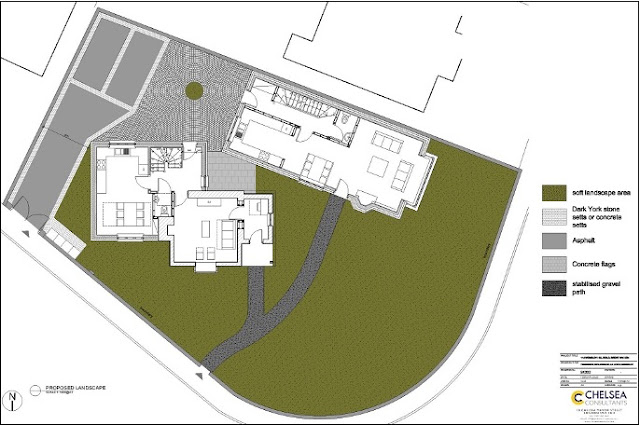 In this case, the architects have positioned the proposed new house so that the front follows the existing building line for Wembley Park Drive, even though this means that is at an odd angle to the Lodge. But how do you design a new house that will sit close to both a restored heritage building and the much later homes next door?

The proposed elevations drawing, as seen from across Wembley Park Drive.
(From planning application drawings, with notes added in blue)

The Lodge, which was by the gate to the drive leading up to the Wembley Park mansion, was built in the “cottage orné” style, which was popular in the late 18th and early 19th centuries, giving a picturesque rustic feel to the gate-keepers cottages on country estates. This one may well have been designed by Humphry Repton, as part of his landscaping for Wembley Park in 1793.

For the new house, the architects have borrowed features from “orné” cottages built at Blaise Hamlet in 1810. These were a collaboration between Humphry Repton and the architect John Nash, and show marked similarities in their chimneys and other characteristics to the lodge at Wembley Park. The Blaise Hamlet cottages (now a National Trust property on the outskirts of Bristol) were built of the local Cotswold stone, but the proposed new house has a tiled roof and white rendered walls, to match with the neighbouring houses in Wembley Park Drive.

I would not claim that the proposals for 114 Wembley Hill Road are perfect (I do have some doubts, especially over excavating for basements so close to existing buildings). However, I think that overall they offer a good solution to a tricky planning problem, and one which would see an important local historic building restored, and back in use. If you would like to look more closely at the plans, make your own judgement and submit any comments (by 27 May), you can do so here.

I said above that corner sites are important in shaping the character of an area, and I will give two more examples of this from recent planning applications. Last August, Brent’s Planning Committee voted, by a 5-2 majority, to approve Brent Council’s own application to demolish the locally listed Victorian villa at 1 Morland Gardens. This beautiful building would make way for a new adult education building, with up to nine floors of flats above it. The decision went against Brent’s heritage assets planning policies, and ignored objections from many residents, and from the Victorian Society and an expert on historic architecture. 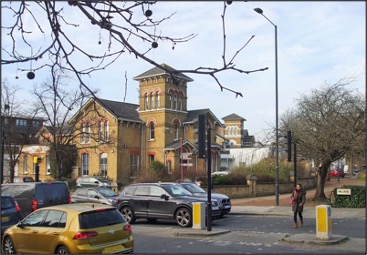 “Altamira”, the Victorian villa at the corner of Hillside and Brentfield Road.

Updated college facilities and new affordable homes are an attractive proposition. But to demolish a beautiful and still useful building, part of the original Stonebridge Park from the 1870s, and replace it with a modern block, will ruin the character of the area. That is especially so as the plans also involve building out over the existing community garden on the corner.

Another application approved last year, again despite strong opposition from local residents, was for a three-storey block of flats at the corner of Queens Walk and Salmon Street. Objectors pointed to Brent’s planning policy that developments should respect the suburban character of areas such as this, and said that the proposed building, on a prominent site, would be out of character, a ‘blot on suburbia’ and ‘an eyesore’.

In their report to Planning Committee, recommending approval for the scheme, planning officers argued that it would not be an eyesore. They said: ‘The corner plot presents an opportunity for a building of a differing architectural style and slightly greater prominence to sit comfortably without detracting from the character along either of the streets it adjoins.’ The plans were approved, and the new building is now taking shape. Readers can judge from these photos whether or not it detracts from the character of the streets it adjoins. 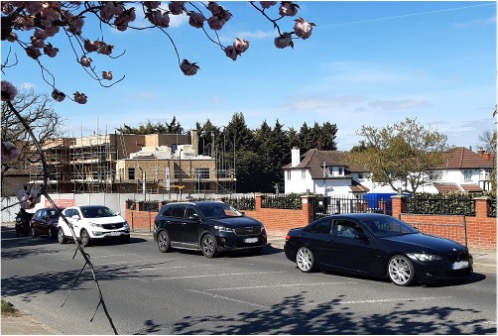 A view along Salmon Street towards the new development and Queens Walk. 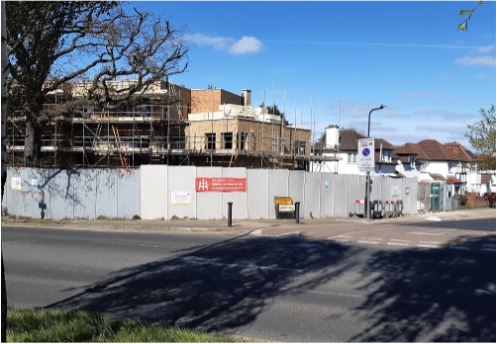 Close up of the new 44 Queens Walk development. (Both photos by Martin Francis, April 2021)

I asked in my title ‘What makes good planning? You are all entitled to your own views, and are welcome to share them as comments below. I would compare planning in Brent to a “spaghetti western”, and suggest that my three examples above show the Good, the Bad and the Ugly.