Brent’s Historic Green Spaces – do you live near one? Make sure it is protected

In a comment on Martin’s first blog about the planning application to build a block of flats in Barham Park, I said that I had set out the case for the park to be treated as a “heritage asset” in its own right as part of my objections. 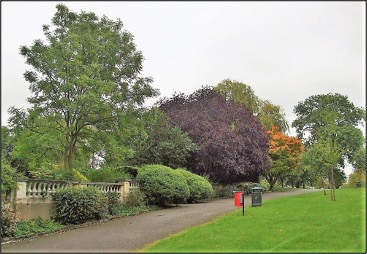 The site of the Victorian mansion in Barham Park, September 2015.

I sent a copy of my case for this to Brent Council’s Heritage Conservation Officer, and his reply was that it already had that status. He said:

“I can confirm that Barham Park would be treated as locally designated asset as it is contained on the London Gardens Trust Inventory.  See 10.3 of Brent’s Historic Environment Place-making Strategy.  It states ‘The London Parks & Gardens Trust has identified 38 sites within Brent which have been included on its Inventory of Historic Green Spaces. These sites are treated as Locally listed within the Borough and are identified as having a degree of significance meriting consideration in planning decisions.’”

The fact that thirty-eight “Historic Green Spaces” in the borough are meant to have the same level of protection as locally listed buildings for planning purposes came as news to me, so I thought that it was something that was worth sharing with you. It is not something that I’m aware of the Council, or its planners, having drawn to public attention.

As “non-designated heritage assets”, any planning application that affects one of these green spaces, or its setting, should include a Heritage Statement, which describes the heritage asset and its level of “significance”, sets out the degree of harm to that significance which the proposals in the application would cause, and anything that the proposals will do to mitigate that harm.

This is certainly something that anyone looking at plans for a development near one of these green spaces in their area should bear in mind, and make sure that it is referred to in any objections they may make. If a heritage statement is not included as part of the application, or is inadequate, this can be drawn to the Case Officer’s attention as grounds for, at least, requiring further information on this heritage aspect of the plans.

Here is the list of the thirty-eight Historic Green Spaces, from Brent’s Historic Environment Place-Making Strategy, which is one of the documents (adopted by Brent Council in 2019) which form part of the borough’s “emerging Local Plan”:- 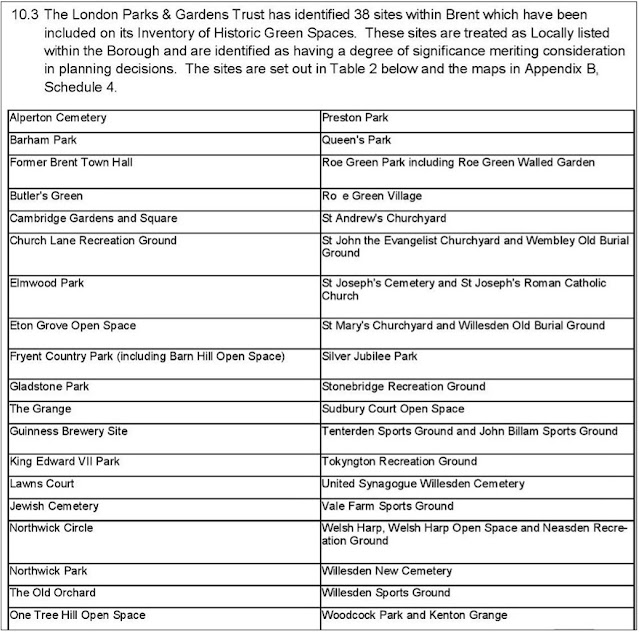 Remember, these green spaces are all Heritage Assets, which Brent’s own policies say are a valuable part of our historic environment, and deserve protection!

Sadly, as we know from the experience of Brent’s own planning application to demolish Altamira, the locally listed Victorian villa in Stonebridge, the Council and its planners do not always abide by their own adopted policies! But that should not stop us from flagging up those policies, and the level of protection which they are meant to provide, whenever they are relevant to a planning proposal which would have a detrimental effect on one of our Historic Green Spaces.

We have a lot to thank Philip Grant for and for challenging Brent Council when they suffer 'amnesia' and of course Martin for reminding us. It is down to all of us to show an interest and do our best to protect what remains of past heritage.

Half of Stonebridge Recreation ground is now a housing estate

Not to mention the loss of the space previously occupied by Stonebridge Adventure Playground (and the 'wild area' behind it), and the green space (and trees) in front of Stonebridge Primary.

Not to worry, it's only Stonebridge, so it doesn't matter does it? (yes, I'm taking the ......). I bet it's another Mo Butt project, perhaps he'll even name the buildings (boxes) after himself. I wonder why he disliked the green space and playground.

Posted by Fed Up