Guest blog by Philip Grant in a personal capacity

It makes a change for me to be able to share some good news with you about the heritage tile murals at the Bobby Moore Bridge and Olympic Way. But that’s what this article is about. The January 2020 tile mural “reveal”, with some damage arrowed. (Photo by Francis Waddington)

When three tile mural scenes, which had been covered over with Quintain’s vinyl advertising sheets since the autumn of 2013, were revealed on 18 January 2020, at the launch of Brent’s year as London Borough of Culture, damage which had occurred to the tiles could be seen. It was clear that water had seeped behind the top of the tiles in Olympic Way (just outside of the subway from Wembley Park Station), and two areas of tiles on the Ice Hockey mural had fallen off and broken. 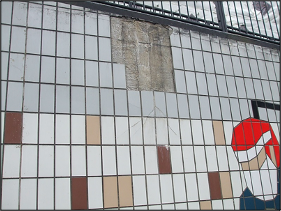 A close-up of part of the damage to the Ice Hockey mural, February 2020.

I spoke about this to Julian Tollast, one of the Quintain representatives (who I first met at a heritage event in 2014) at the “reveal” hosted by Brent’s Mayor and Council Leader. He said he would ensure that this damage was repaired. I asked that Quintain should at least make sure that the “fillet” along the top of the tiles was made watertight, before vinyl advertising sheets were put back over the murals five weeks later.

During this time, I managed to make contact with a director of the company which had designed the murals, and supplied the tiles, in 1993. They had sold the tiles side of their business in 2000, but he was able to identify the type of tiles used, and give details of the German manufacturer which made them. I passed this information on to Quintain, who were hoping that the repair work could be arranged for the autumn of 2020, when there would be a changeover of the vinyl sheets.

Unfortunately, when the adverts came off again, for the three week “periodic display” of these mural scenes in March 2021, the Ice Hockey mural was still damaged. In fact, the damage seemed worse. 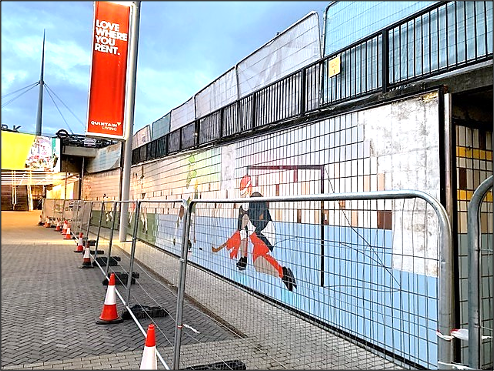 When this photo was shared with me, I contacted Julian at Quintain again, to find out what was happening about the repair. After checking with Quintain’s Wembley Park Operations Team, he was able to tell me that the damaged tiles had been removed, and loose tiles secured. A waterproof mortar fillet had been installed along the top of the mural scenes. Matching replacement tiles had been obtained from a UK manufacturer, and these would be put in place by a specialist contractor by the end of March.

I was not able to visit Olympic Way to see the work on the tiles myself, but I was told that photos would be taken before the murals were covered over with adverts again. I looked forward to receiving these, so that I could share them with you, but there was a delay before copies were supplied to me. However, the pictures were worth waiting for! 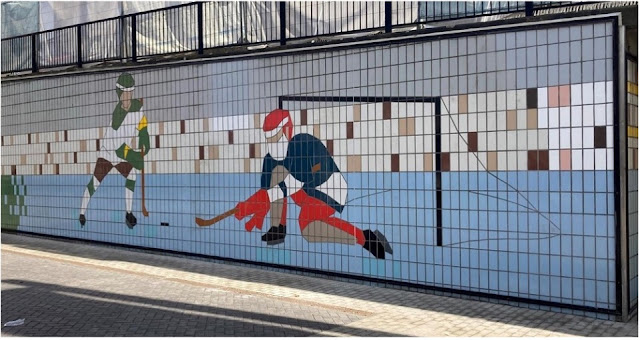 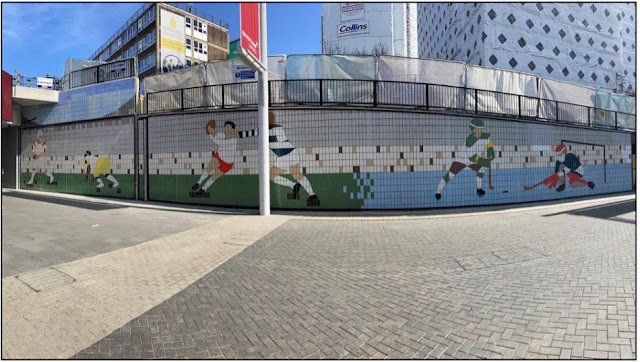 I would like to publicly thank Quintain’s Wembley Park team for the repairs carried out to the Ice Hockey tile mural. They clearly realise what a valuable cultural and heritage asset these beautiful murals are for Wembley Park. It’s just a pity that they won’t put them back on permanent display, so that residents and visitors can enjoy them, rather than the bland advertising sheets which cover them most of the time! 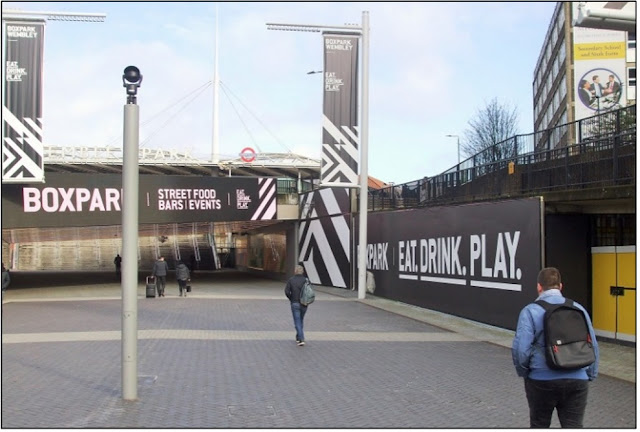 How the tile murals in Olympic Way usually look, March 2020.

I have sent a link to this article, and a pdf copy of it, to Quintain / Wembley Park, with an email including the following message:-

'As you will see, I have ended my article with the hope that Quintain / Wembley Park will put these Olympic Way tile mural scenes back on permanent public display.

Quintain knows how beautiful they are, especially after your recent work on them, and what an important part of Wembley Park's sporting heritage they represent. It may have made commercial sense to cover this stretch of wall with adverts back in 2013, when you were about to launch the London Designer Outlet, and later, to publicise the Tipi "brand name" (which you've subsequently changed anyway).

Now the name of Quintain, and its various business interests at Wembley Park, is widely known. You have much larger LED advertising screens on the parapets of the Bobby Moore Bridge, and rows of large banner adverts hanging from the lamp standards along Olympic Way.

I hope that Quintain and its Wembley Park subsidiary will seriously consider my request to stop advertising over these mural scenes in Olympic Way, when its current advertisement consent expires in August 2022, if not before. Thank you.'