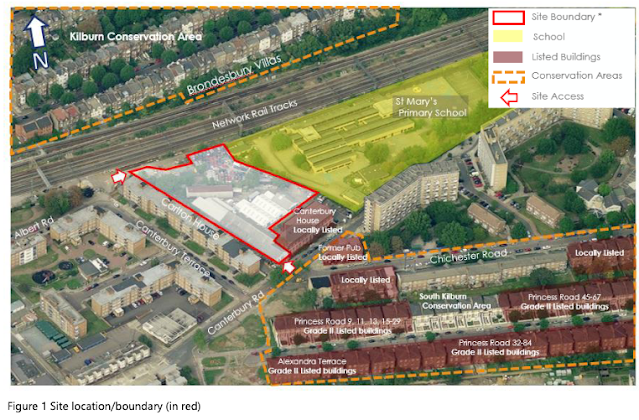 The development site outlined in red, school grounds in green and Canterbury House and Carlton House

A battle started about 6 years ago when Brent Council asked HS2 to site a proposed vent site for the high speed rail running underground at this point at a site next to a primary school in South Kilburn rather than one adjacent to Queens Park station.

Today in Parliament, I voted against the High Speed Rail 2 (HS2) Bill that will devastate areas of Camden and Brent.

I have campaigned against HS2 for the past seven years as I believe it is an ill-thought out scheme that will lead to bedlam on our roads, disruption to the education of school children and a compromised local environment. (my emphasis)

Further, these plans will cost taxpayers billions of pounds. I believe this money could instead be spent on projects that will actually bring real improvements to living standards across the country.

Having spoken against this Bill at the Select Committee, and again in today’s debate, I’d like to take this opportunity to thank residents who engaged with the lengthy and costly petition process. Though the Bill received support from across Parliament, it is your voice that will force HS2 to fulfil its assurances to compensate and mitigate the worst of the impacts.

My first priority as the MP for Hampstead and Kilburn is to protect residents in Camden and Brent. Therefore, I am proud to have voted against High Speed Rail 2 today in Parliament.

The scheme have now been granted permission by parliament, but I will keep fighting for mitigation for constituents.

Of course HS2 has gone ahead costing billions of pounds more than first suggested but for South Kilburn residents the question is still whether on South Kilburn the proposed vent will 'lead to bedlam on our roads, disruption to the education of school children and a compromised local environment.'

Unfortunately as officers note the legislation gives HS2 enormous powers and limits that of the Planning Committee:

The above mentioned approvals have been carefully defined to provide an appropriate level of local planning control over the works while not unduly delaying or adding cost to the project. As such the legislation states that planning authorities should not through the exercise of the Schedule seek to revisit matters settled through the parliamentary process, seek to extend or alter the scope of the project, modify or replicate controls already in place, either specific to HS2 Phase One such as the EnvironmentalMinimum Requirements, or existing legislation such as the Control of Pollution Act or the regulatory requirements that apply to railways.

For residents the immediate issue will be noise from the site and associated vehicle movements with extensive ground works required. These issues are not the subject of the report: 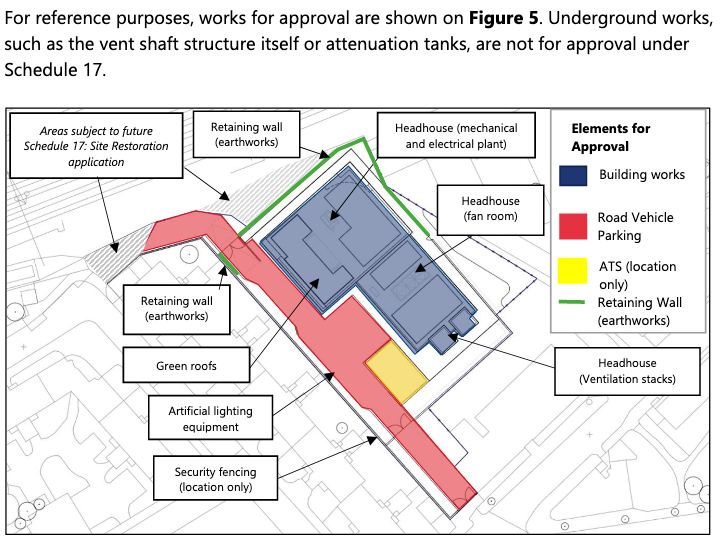 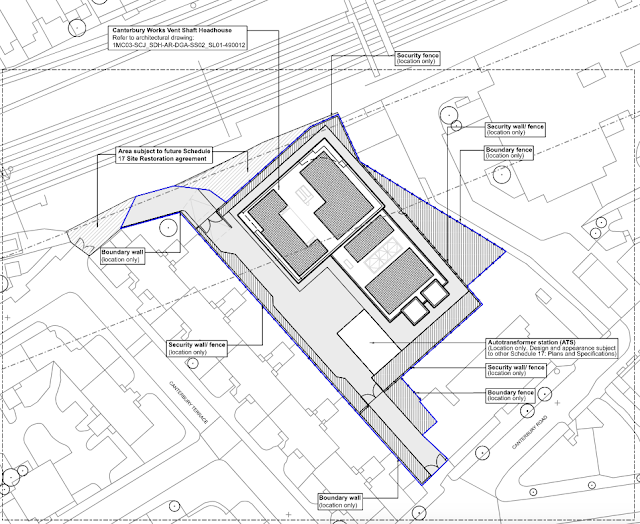 Mitigation includes a small strip of grass to be made available to St Mary's Primary School, walls and fencing around the perimeter of the site and  the widening of the cross-over with Canterbury Road from 3 metres to 6 metres. 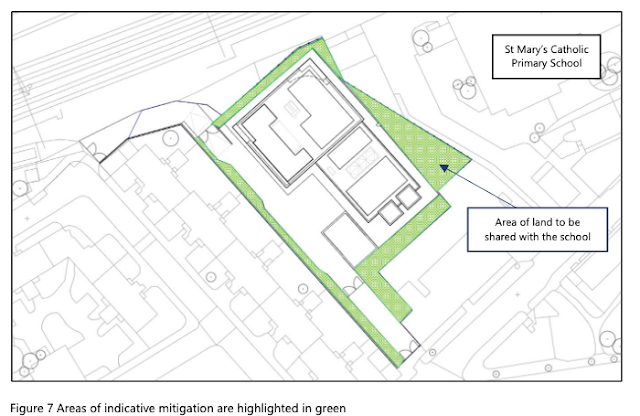 There is only one objection recorded on the Brent Council Planning Portal froma resident of Canterbury House:

The current design is radically different from the original proposal. There are more buildings and the design height is much greater; the original proposal included the extraction fans installed underground but the revised plans are far more intrusive on residents neighbouring the development. The current proposed height of the headhouse building will have a major impact on natural light and views available to the properties at the rear of Canterbury House. Residents of Canterbury House bought their properties with knowledge of the original plans but there are deep concerns that the revised plans could significantly deter potential future buyers. If the first plan to construct the vents at Queens Park was withdrawn due to resident objections, why has the design at Canterbury Works revised in such a way that the impact on nearby residents will be significant and possibly more so than what was proposed at Queens Park.

The committee report states at paragraph 16 that there would be no breach of the 30 degree rule when considered in relation to Canterbury Terrace. However, there would be a slight breach of the 30-degree rule from two of the ground floor units due to the greater height of the ventilation stacks which sit adjacent these homes. However, given the separation distance (approximately 18 m) and the fact that a daylight/sunlight report has been submitted to demonstrate that there would be no harmful loss of light, the breach is considered acceptable in this instance. It is also important to note that the Design and Access Statement confirms that the vertical ventilation stacks have been reduced in size to the minimum required in both plan dimensions and height. Therefore when having regard to the fact that the LPA are required to given consideration to whether the works 'ought to or could reasonably' be modified to protect local amenity, given the information provided the arrangement is considered acceptable.

Since the publication of the agenda one further comment has been received in relation to the application. This comment raises concerns about a lack of mitigation or compensation for protecting or safeguarding South Kilburn's residents' quality of life. It also makes reference to the new tree planting HS2 are doing in the Chilterns and the lack of any similar mitigation for Brent. The potential impacts on surrounding properties is discussed within the committee report.

Firstly, it is important to note that HS2 works in South Kilburn and the Chilterns are very different. It is also important to note that the character of the areas differ greatly with South Kilburn being a far more urban environment. As this is not a planning application, the Local Planning Authority are unable to seek obligations to secure funding for tree planting in the area.

However, whilst the committee report focuses on the works for approval, the submission does include a number of 'For information' drawings to show future intentions of the site. As stated in the committee report a follow up application for 'Bringing into use' is required to be submitted, whereby HS2 are required to demonstrate that the impact of the development has been mitigated as far as possible. This is expected to include a detailed landscaping and tree planting scheme on site and the provision of a 'pocket park' to provide educational opportunities to neighbouring St Mary's PrimarySchool. However, it important to note that these works are not for approval under this application.

Where to start. Your report rightly says how residents of South Kilburn opposed the vent shaft being where it is. It would have been on the car park by Queens Park station if Brent Council hadn't persuaded HS2 otherwise. So we expect little from either brent or HS2. Residents backing on to the site have to struggle to get proper protection from noise and dust. residents in the area (already continually plagued by regeneration building sites) have to put up with heavy lorries around well before 8 a.m. when sires are supposedly permitted to start work. The "pocket park" HS2 boast is a joke. It might be open to groups of accompanied children from the school, but not to residents, whether children or adults. So no, no mitigation from local residents. We just get the "benefits" of heavy vehicles in an already overcrowded area.

Powers given to planning authorities for Schedule 17 applications such as this are shown here:

Looking like a done deal between Brent and HS2 doesn't it? Strange how some elected Brent councillors treat their residents' interest's and thier health isn't it? Air quality matters when campaigning or selling something to us, but in reality it is accepted (ignored) as part of regeneration (profits for some at the expense of others).