AT Medics re Operose and Centene takeover: 'We can't see how we can get this wrong' 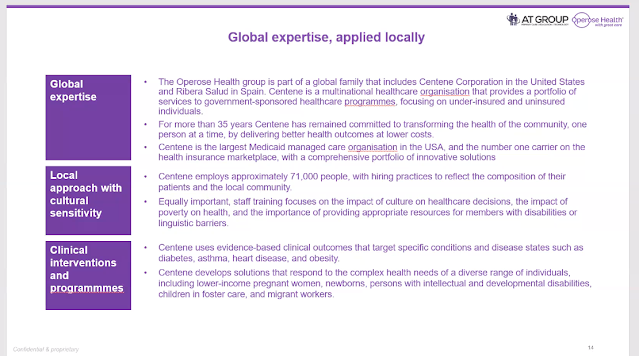 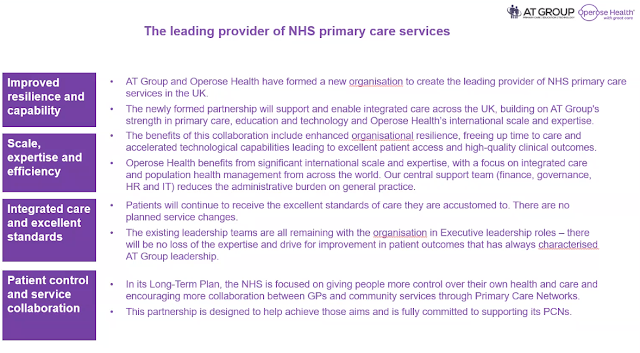 Much of the meeting was taken up by a slide show from Operose and AT Medics.  The meeting was told that AT Medics had been started by 6 GPs who were all from a 'deprived background' and wished to 'give something back.' They had started with one practice but through 'process design' had grown to 47 practices across London. They run 6 vaccination sites across London which focus on hard to reach groups.

Answering questions from Brent Patient Voice they gave assurances that they did not share data for marketing purposes or without the permission of patients (caveats around care home patients  and medical emergencies),  They said that they could not extend Burnley Practice opening hours because they were  limited by their contract with the NHS, addressed criticism of health questions being asked by non-medically qualified staff at triage, promised improvements in patient access via IT when the surgery is closed and the ordering of prescriptions via the surgery App.

Robin Sharp of  got down to the nitty gritty to ask why AT Medics had approached Operose as a partner. He was told that the GPs were not business people and needed support for management  and governance and access to resources. The model they had been working with was not sustainable at the scale they had reached. They needed the skills, leadership and resources that 'like-minded' Operose offered.

AT Medics said that it was early days of the new arrangement, a honeymoon period, and doubtless there would be bumps in the road, but they were getting on well.

Cllr Gaynor Lloyd wanted more information on the claimed advantages of Centene's international links and the dependence of Operose on Centene's income. Operose itself  was loss-making and had AT Medics looked at Centene's exit from practices not making a profit?

Mohammed Tahir replying said that there were multiple aspects to the issue. They had engaged with Centene and found them very different: 'We believe in them. We are successful and we can't see how we can get this wrong. We just needed the organisational back-up. All contracts were won on a competitive basis. As long as we are the people concerned we will be part of the NHS culture.'

On consultation with patients, AT Medics said no formal consultation was required as there was no change in the service offered but there had been a dialogue. On services that had closed Camden Road building lease had expired and no replacement building was available and a Child & Adolescent Mental Health Service provision had been found to be unustainable.

AT Medics said that they were regulated by the Clinical Commissioning Group and like all NHS services were free at the point of delivery and were committed to increasing public access. They would always work with strategic NHS objectives and prioritised working with Primary Care Network.

Robin Sharp felt some of the answers had been inadequate and people were still interested in why the takeover had taken place and wanted to know what Centene's intentions were.

Cllr Lloyd wanted to know about Population Health Management and if Operose was a joint data operator with AT Medic - if so could data be sent to the US?  AT Medics replied giving the example of data on diabetes checks where analysis was used to see how many patients had not had the 8 checks required and needed following up. They trained staff in how to use Population Health management as an approach.

Cllr Johnson asked AT Medics how many other providers they had approached but was told that the information was commercially sensitive and confidential.