Baghdad’s House of Wisdom - another online event from Brent Libraries 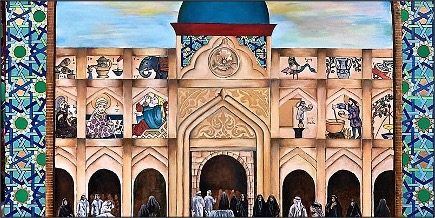 Although I know quite a lot about local and English history, I have to admit that I had never heard of the “House of Wisdom” in Baghdad. So, when I saw that this was the subject of the next online “coffee morning” talk from Brent Libraries (on Wednesday 2 June at 11am), I had to “google” it to find out what the talk might be about.

At around the time that the Anglo-Saxon farmer, Wemba, was making his clearing in the woods, which would later give its name to Wembley, around the 8th century, a Caliph of the Muslim  Abbasid dynasty was setting up a library in Baghdad. He and his successors added to their collection by having scholars translate books and manuscripts from Greek, Syraic, Persian, Chinese and Sanskrit into Arabic. Their library became known as Khizanat al-Hikma, the Storehouse of Wisdom.

One of the few Arab scholars from “the Middle Ages” who I had heard of, through my love of maps, was the 12th century geographer, Al-Idrisi. Translations into Arabic of ancient Greek works, such Ptolemy of Alexandria’s “Geography”, coupled with information from travellers of his own time, enabled him to produce maps of the world (as then known) like this: The Caliphs also invited scholars from across the Middle East, Europe and India to come and share their knowledge of mathematics, astronomy, medicine and a range of other sciences, as well as poetry and art. The House of Wisdom became a centre of learning, and this painting, by the artist Yahya al-Wasiti, from 1237, shows it in action, just a couple of decades before it was destroyed when a Mongol army laid waste to Baghdad: 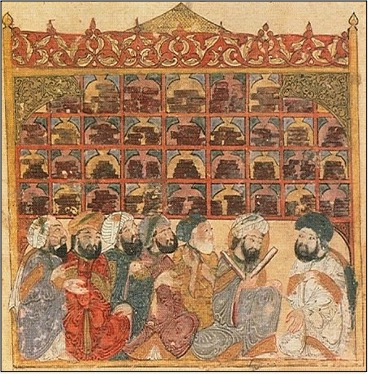 The free online talk about the House of Wisdom will explore the discoveries of scientists like Ibn Haythm, Banu Musa brothers, Mariam Al-Ijliya and Al-Jahiz. It will be given from the perspective of an Iraqi woman growing up in the UK, who researched its story to help understand her past, in order to make sense of the present state of Iraq.

From my brief reading of the subject, the House of Wisdom in Baghdad has a story which deserves to be more widely known, in order to give us a better understanding of the world. I have signed-up online to participate in this Brent Libraries event on Wednesday 2 June at 11am. If you would like to get tickets as well, or to find out more, you can “click” here.