Brent Council to provide incentive for council tenants to downsize 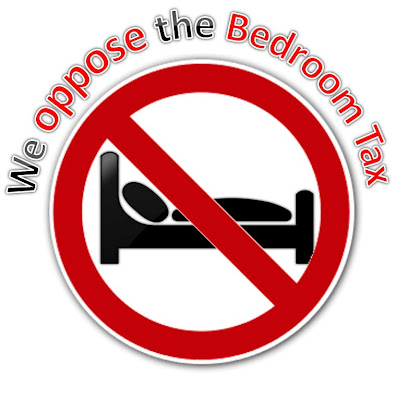 With the 'Bedroom Tax' leading to protests across the country and some Labour Councils joining Brighton and Hove Green Council in announcing that they will not evict tenants in arrears solely because of the tax, Brent Council has announced that it will introduce an incentive for tenants to down-size.

So far neither they or their arm's length Brent Housing Partnership have defined what constituents an 'extra bedroom'. Some housing associations have reclassified small extra rooms as boxrooms rather than bedrooms thus avoiding tenants getting caught by the tax.

This is the  proposal to be discussed by the Executive at tonight's Brent Town Hall meeting:


"The Size Criteria, or ‘Bedroom Tax’ will be implemented for underoccupiers of social housing stock from the 1st April 2013, and tenants will receive a reduced amount of Housing Benefit to pay the rent with. Given the current demand on social housing, particularly from homeless households who will be affected by other Welfare Reform measures, transferring underoccupiers to right sized accommodation is favoured, and needs to be encouraged. The currently financial incentive offered to households to motivate the move is a flat rate of £1,000. The proposal is to increase this to £2,000 per bedroom released, per household (to a maximum amount of £6,000) to encourage underoccupiers to move to smaller homes. The cost of providing the increased incentive payments is offset against savings to both the Temporary Accommodation (TA) budget and the Housing Revenue Account (HRA)."