By coincidence, following my Saturday post calling for Sarah Teather and Brent Lib Dem's to disown the Coalition, this article by Sarah Teather was published in the Independent on Sunday. It makes a more unequivocal stand against scapegoating than the Opposition has yet managed. 'Divide and Rule' was one of Margaret Thatcher's favourite weapons and its use will live on well after her death unless decent people across the political spectrum take it on. 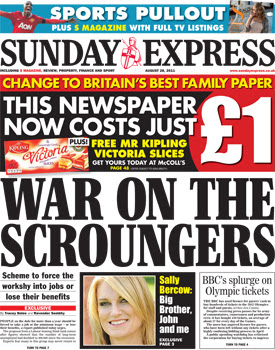 By the time this column is published, I expect that the commentary on the grubby little intervention by George Osborne on the Philpott case will have moved on. We should be well into post-match analysis of tactics and strategy.


Political dividing lines are de rigueur for modern politics – no one actually pauses to ask whether something is right. We ask instead whether this gamble was an astute reading of the public mood. Somewhere in all the excitement of keeping score we forget entirely that those caught up in the middle of the debate are human beings with real lives and concerns.

There is nothing like insecurity to bring out the temptation to scapegoat. Instead of offering a bit of statesmanlike leadership, Conservative ministers have engaged repeatedly in crude opportunism, capitalising on fear. And so the battle is drawn: good against evil. Those without benefits against those who claim. Strivers against shirkers. The deserving against the undeserving.

Then, just before Easter, all parties chose to reignite that old flame: the immigrant against the local. Demonising successive groups of people makes us less empathetic, less cohesive – a vision, to me, that is the very definition of "Broken Britain". And what of the subjects instrumentalised by this political game? They are placed further and further outside society, less able to change their own lot.

To demonstrate a tough stance against that most hated of groups, so-called "failed asylum seekers", ministers in the last Labour government introduced a series of cards and vouchers to control what they could buy with the meagre rations we gave them. I know, from my work as a constituency MP, the humiliation, shame and practical barriers such schemes impose on those who are unable to return home for a whole host of reasons.

If your empathetic instincts have been too dulled to feel a common humanity with those at the bottom of the hierarchy of public approval, remember this: the abuse that is hurled on to those on the bottom eventually infects us all. Privations imposed on one group quickly become acceptable for others. The marginalisation of immigrants and the poorest is tangible. Silence will only entrench that still further.

Government is an ephemeral business. Whichever party you are in, you have but a brief period to make a difference. This Government needs to decide what kind of country it wants to leave behind. One more cohesive, more sympathetic, more neighbourly? Or one more divided, more brutal and more selfish? That is the responsibility and the privilege of power. Ministers should use it wisely.
Posted by Martin Francis at 13:49:00