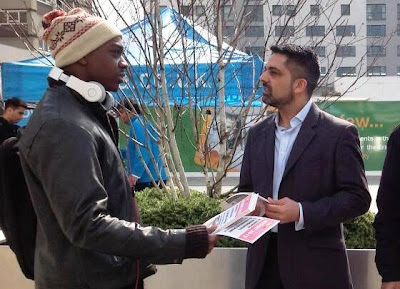 Cllr Muhammed Butt, leader of Brent Council, has told Labour Group members that he is determined to get behind the campaign to Save Central Middlesex Accident and Emergency.

Butt and some of his colleagues took part in the Brent Fightback march against the closure but they cited lack of Liberal Democrat and Conservative support as the reason they could not take an official Brent Council stand on the issue. They claimed this  meant that they could not mount a campaign such as that by Ealing Council that mobilised thousands of the local population.

In addition Brent Council's Health and Overview Scrutiny Committee failed to take a strong stand in defence of the A&E, accepting many of the arguments for closure, and then defeated a motion to join Ealing Council to refer back the reorganisation.

Butt now wants to take a much stronger position and has challenged his colleagues to give him full backing.The issue has already been mentioned by several of the candidates for the Brent Central parliamentary candidate nomination.

The leadership of Brent Labour will again be up for challenge at the May Annual General Meeting. A challenge to Butt's leadership fizzled out in February when his opponents were unable to muster enough support to table a no confidence vote.
Posted by Martin Francis at 20:05:00

What a joke. A year sleeping and suddenly Butt awakes from his slumber at five to midnight?

And it is worth noting that the colleague who joined him on last year's march, Councillor Krupesh Hirani, was instrumental in ensuring that the closure decision was not referred up to the Secretary of State to be reconsidered. At the recent Health Scrutiny Committee meeting, instead of backing Councillor Hector's motion calling for referral, he drafted an alternative bland motion expressing concern but ultimately meaning nothing. No referral, no condemnation, nothing. Brent's Labour councillors should be ashamed of their failure to defend our services. Nye Bevan would be ashamed of them. I am ashamed to have voted for them.