As you probably know I have had an exchange of letters with Cllr Mary Arnold (Brent Executive lead member for children and families) over education in Brent and my claim that the Labour Council is not standing up for a democratically accountable local school system and in particular backing the Gladstone Park Primary parents in their campaign against becoming a forced academy. (Mary Arnold saw that as me 'attacking Brent Education'.)

James Denselow has posted this defence from Mary on his blog:

What is Brent Labour doing in response to Gove’s agenda?

Answer from Cllr. Mary Arnold – Lead Member for Children and Families:
We are primarily campaigning with London Councils tackling  Gove on free schools  which are unaccountable and in the wrong places, unaccountable academies, cutbacks in the Early Intervention Grant reducing surestart for early years and unfair access to childcare.
In Brent we joined other local authorities in a national campaign to challenge the injustice of moving GCSE grade boundaries so over 100 Brent pupils were downgraded in English, undermining their career chances. Our campaign was covered by the national and local press with lots of my quotes over the period..
My letters to the local press on Gove’s u-turn on the curriculum are published
http://www.brentlabour.co.uk/gove_s_u_turn
and my article on Gove forcing schools in his academisation drive and his shocking dismissal of parents’ views at Gladstone is on the website.
http://www.brentlabour.co.uk/supporting_gladstone_primary
I sent my letter published in Brent and Kilburn Times challenging Martin Francis’ letter attacking Brent Education the previous week to all Labour activists but I think the H and K members are not always included. Lee is therefore including website references in his campaign newsletters
There is more including a H and K education ‘think piece’ I am contributing to. Happy to talk to members and send on campaign articles with more coming up.

Cllr Michael Pavey, (Labour, Barnhill) Chair of Governors at Wembley Primary School is said to be challenging Arnold for her Executive post at next month's AGM. Denselow is challenging Lesley Jones for her position and a good source has said that Cllr Roxanne Mashari (Labour, Welsh Harp) in challenging Cllr James Powney.

So we can expect some manoeuvring ahead of the votes and a debate is always healthy. However a Brent Council spokesperson in the report below on the Gladstone Park Primary campaign again seems to indicate that Brent Council is willing to do little to fight forced academisation:

A Brent Council spokesman said the authority was working with the headteacher and governors on offering 'programme of support':

The DfE's default position is that a school which fails its Ofsted inspection becomes a sponsored academy and parents are campaigning against this. We understand that governors are still making their case to the secretary of state. It is inappropriate for the council to discuss future options directly with parents' groups. We discuss options with the governing body, which in turn has the role of consulting parents. We're sorry if we didn;t respond in a timely way to explain that.

No condemnation of forced academies policy, no condemnation of DfE bullying, no support for the parents' battle and no expression of confidence in the staff and governors' capacity to improve the school without being forced to become an academy. 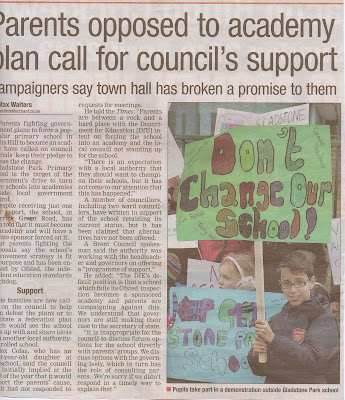