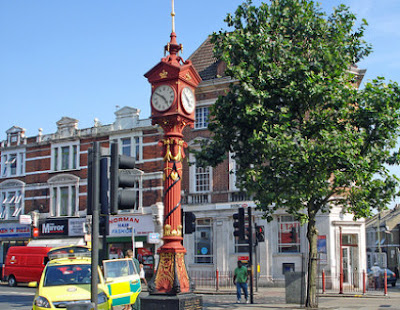 Brent planning officers in a report to the April 17th Planning Committee have recommended approval for the proposed relocation of the landmark Jubilee Clock as part of the new road layout. The new site will be outside numbers 53-55 Harlesden High Street and about 5 metres from its current site.


THE JUBILEE CLOCK THROUGH THE AGES 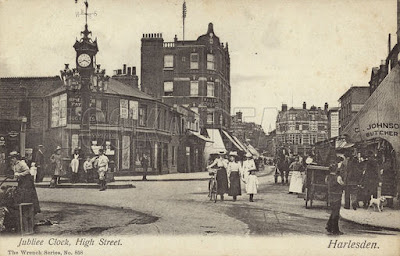 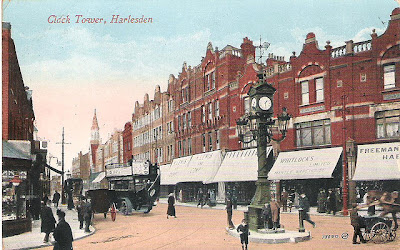 
Although the clock is statutorily listed feature it is not in its original location which by definition makes the specific location less important as a criteria for listing. At the time of the clocks origin (1887) there was far less traffic than there would be a few decades later. At least two trams derailed and collided with the clock in the first half of the twentieth century, one of them tearing off one of its four decorative arms. In 1938 the Clock Tower was relocated to a location 3m from its original position. It was hoped that in relocating the Clock Tower, motorist would find it easier to navigate the area. As explained above, the relocation of the Clock is required to bring about a better traffic management scheme here also.


The proposals do not call for any alteration or changes to the clock itself which therefore means it will retain the architectural quality and character that instigated its listing. The Clock is to be moved (5m) from its present location which by definition would mean that the setting of the Clock would not change significantly.

The clock will not be quite as prominent in the streetscape given that it is currently located in a traffic island in the centre of a road junction as before but will however still be visible along the High Street. The new location will make the clock less susceptible to damage from passing vehicles, thereby protecting the listed feature.

The Planning Service is not committed to this new location ahead of any others and whilst there may a range of locations that might be acceptable, particularly given that the current location is not original as mentioned above, no objection is raised in principle to the new location in listed building terms.
AND IT WILL TELL THE TIME!


As part of the proposals the clock will be repaired and will tell the time, which is a welcomed addition to its listed status.