Four years  ago a united campaign of local political activists and environmentalists saw off proposals for housing developments in both Barnet and Brent areas of Brent Reservoir, popularly known as the Welsh Harp.

Those proposals are dwarfed by the enormous West Hendon development proposed by Barratts which is soon to be considered by Barnet Council. 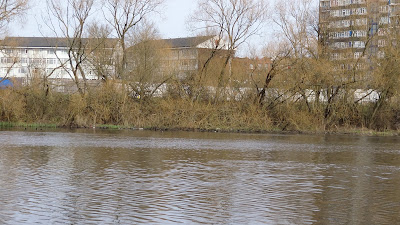 The development is adjacent to an SSSI (site of Special Scientific Interest) on the Welsh Harp which is home to nesting birds and used by over-wintering birds.  It draws visitors from all over London and beyond. The footpath is well used by many Brent residents who start their walk at the Birchen Grove end of the Welsh Harp.

The development will include tower blocks of up to 26 storeys high - double the height of the one in the photograph.The existing 597 homes will be demolished and replaced by 2,000 houses and flats including 4 tower blocks. There are proposals to build footbridges over the Silk Stream and beside Cool Oak Bridge which are likely to cause water pollution during construction. The area is already one designated as having poor air quality and the development is likely to increase traffic in the area.

Barratts have already built a 12 storey block next to Cool Oak Bridge which gives an indication of the overbearing nature of such blocks and the extent to which they rise above tree height. The new blocks will be twice as high. 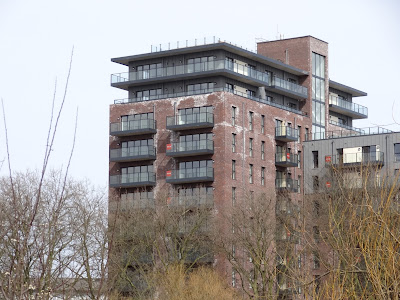 There is some confusion about the date by which letters have to be received by Barnet Planning Officers, the safest assumption is that the deadline is April 30th. The Planning Reference is H/01054/13 and the Barnet Planing contacts is: Thomas.Wyld@barnet.gov.uk

Full documentation can be found HERE

I reproduce below a submission on the development that sums up the issues very well:


The Northern reservoir is an important refuge used by wildfowl when there is disturbance on the main reservoir from sailing. It functions this way throughout the year but especially during the winter months when the normal numbers of birds increase by several hundred displaced ducks and other wildfowl. The area most used by these birds is along the bank next to the estate. It is a SSSI which should afford a high level of protection under wildlife legislation. An important screen of trees currently separates the water from the estate. The marshy northern end of the water is also important for breeding wildfowl in the sheltered pools and channels. Finally at the northern end is a quiet area of wet woodland in which a number of shy woodland birds breed (owls, woodpeckers, warblers). The area of the re-development abuts the whole of the edge of the waterway, marsh and woodland.


The proposal involves a huge increase in the density of housing and greatly exceeds the GLA recommended level for a site of this size increasing from 7-800 housing units to over 2000. A key feature of the proposal is the construction of a number of extremely high tower blocks, up to 26 stories in height; these are sited immediately adjacent to the Water and the SSSI boundary. The excessive height of these towers seems more appropriate for a central financial district than a North London suburb. The development will have a major impact on the surrounding area and put a huge strain on local health, education and road infrastructure.


Impact on the SSSI, reservoir and local area


This development will have a major and detrimental impact on both the Reservoir Nature Reserve and the local community. It is inevitable that the SSSI will be adversely affected.  The planned occupancy level needs to be greatly reduced to a level more appropriate to the area and the setting. The tower blocks should be reduced in height and placed back from the margins of the reservoir. The part of the development already completed shows the overbearing and inappropriate nature of the building design next to one of London’s most important sites for recreation and natural history.

The local council, the owners (of the reservoir) and the developers have a legal duty under existing wildlife legislation to conserve and improve the SSSI. As the proposals stand it is impossible for them to achieve this aim and we can only expect deterioration in the standard of the SSSI.

This is the only place people can come if they want to see a variety and number of birds which live by a large body of water. The only place comparable is the Welwyn boating lake or the Royal Docks (which suffer a wind shadow as a result of towering blocks of flats being built over them by the City of London).
Barnet Council has a duty to increase the screening of the nesting area by planting fast-growing and tall conifer trees behind the existing screening. They also have to make appropriate use of the carpark by the Eastern most sailing club and ensure the BTYC sailing club remains secure from vandals and attackers encroaching from the blocks of flats on their way to Macdonalds.
Also the abandonded greenhouses must be put back into community use as allotments. Food has to come from somewhere and the economic value is in conservation of farming methods and heritage varieties, healthy eating, spiritual connection to the environment, and physical excercise. This plan is something I will be leading on as a resident of West Hendon.