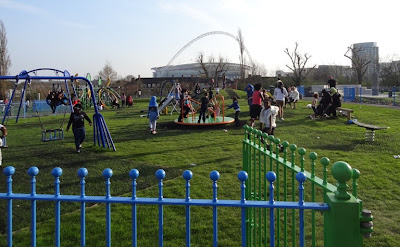 I was greeted by whoops of excitement and shouted greetings as I passed Chalkhill Park at 6.15pm this evening. As you can see the children have taken it over and made it their own.  It is not yet officially open and a pensive child outside whispered, 'You know this is illegal'.  But a parent said, 'How can we tell them they can't go in. They have been waiting for the park for 3 years and here it is now and they just love it!'

A decision will be made tomorrow about a possible earlier opening. There are concerns that the grass sown between the gaps in the safety matting of the children's playground, which is at an early stage of growth, will be damaged but anyone wanting to keep the children out now that they have had a taste of the park  will have quite a job on their hands!

Garth McWilliams who designed the park should be thrilled by the children's reaction.
Posted by Martin Francis at 22:34:00